Z Is For Zindell, David

"Long before we knew that the price of the wisdom and immortality we sought would be almost beyond our means to pay, when man -- what was left of man -- was still like a child playing with pebbles and shells by the seashore, in the time of the quest for the mystery known as the Elder Eddas, I heard the call of the stars and prepared to leave the city of my birth and death." 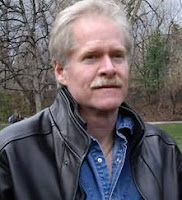 Thus begins David Zindell's 1988 novel Neverness, which is tied for first place with just one other book (*) as my favorite novel of all time.  So favorite, in fact, that I wrote an online FAQ-type document called A Travel Guide to Neverness about the unique sci-fi setting and culture that Zindell created.

Zindell spent the late 1980s and most of the 1990s on the tales of Neverness -- comprising one short story and four novels -- then moved on to write another series of novels in the fantasy genre (which I haven't yet read).  I have massive respect for Zindell as a teacher, too.  It's rare to find someone who writes so dreamily and philosophically who also has his feet grounded in the hard practical work of getting kids ready for adulthood.

"Neverness" itself is a city on an island (also called Neverness) on a cold planet named Icefall. Human beings came to Icefall thousands of years before the events of Zindell's stories, which take place at least 20,000 years in our future. Neverness is special because it is the home to the Order of Mystic Mathematicians and Other Seekers of the Ineffable Flame. This is a high-minded organization with the goal of discovering the secrets of the universe and the meaning of life.

Much of the intrigue of the Neverness stories involves the different professions of the Order, whose adherents go about Seeking that Ineffable Flame in different ways. We readers get to know the black-robed pilots the best; they fly sophisticated lightships from star to star by proving theorems of probabilistic topology -- i.e., they must prove that there are links between the starting and ending "fixed points" in the spacetime manifold in order to make the journey. Sounds far-fetched, but Zindell's flowing prose makes it work:
"With the number storm carrying me along towards the moment of proof, I passed into dreamtime. There was an indescribable perception of orderedness; there was beauty and terror as the manifold opened before me. The number storm intensified, nearly blinding me with the white light of dreamtime. I wondered, as I had always wondered, at the nature of dreamtime and that wonderful mental space we call the manifold. Was the manifold true deep reality, the reality ordering the shape and texture of the outer universe? Some cantors believe this (my mother is not one of these), and it is their faith that when mathematics is perfectly realized, the universe will be perfectly understood. But they are pure mathematicians, and we pilots are not. In the manifold there is no perfection. There is much that we do not understand."In the above quote you also hear about the cantors (pure mathematicians), and there are also scryers, eschatologists, cetics, horologues, fabulists, tinkers, and holists.   The last are especially interesting to me, since they embody Zindell's fascination with Hesse's Glass Bead Game.  With their goal of understanding patterns and whole systems, the holists work to develop and perfect a Universal Syntax for expressing any possible idea and comparing it with any other.  There's almost a religious awe in something so powerful...
"I believe we must learn the infinite subtleties and the deepest logic of language. I believe we must become true speakers of the Word. When we have learned to speak of all possible connections between all things, then we may extend the metaphors of language into an infinite number of new relationships and forms. Only then will we be able to make a new mathematics. Only then will we create a perfect mirror in our words and thus make a grammar for all nature that will be truly universal." All the high-minded philosophy is fun, but Zindell's stories are also about hope, love, and the little joys and pains of life.  He conveys the wonderful goal of being able to open your eyes widely and say "yes" to a universe that is flashing the word "no" at you too many times to count.

Ha!  I didn't plan it, but the above links back perfectly to the quote from Andre Breton's Nadja in my first post of this month's A-Z challenge!  :-)  This has been a fantastic experience, and I thank everyone who came to visit.  I may now take a week or so off blogging to recharge my batteries and think about what to do next.  Happy Walpurgisnacht!

(*) Footnote: I don't want to take away from Zindell's brilliance in this post, so I'll just give a link to a place where I've already blathered on at length about my other favorite novel.