Apologies in advance for a post that's a bit of a rant, but I do think there are ideas here that link the RPG and GBG worlds in interesting ways...

A topic that has reared its head a few times in the old-school role-playing community is a worry that there may be TOO MANY versions of Ye Olde Game floating around.  Everybody has their own favorite tweaks and house-rules, and many people have packaged these into stand-alone rule-sets.  The worries that I've seen include questions like "Are the newest versions really contributing anything new and original?" and "How many retro-clones can the market support?" and "How can a newcomer ever decide which one to choose?"  (I've paraphrased these from comments in Tim's recent post on this topic, but they've been seen before...)

I admit to getting a little frustrated when I see these, but I can't rule out that part of that comes from the fact that I haven't yet published my own version!  In other words, part of me wants to scream "Hey! Don't stop gobbling these things up until mine is on the menu!"  :-)

Still, I think there's an even bigger part of me that's objecting to the idea that too many choices is a bad thing.  A few weeks ago, I heard some discussion on the radio about the latest in a series of "scientific" studies of choice paralysis.  Oh noes, they say, look at all of those breakfast cereals that have the gall to fill up an entire aisle in the supermarket!  How will we eeeever choose?

Sarcasm aside, I don't ever hear that argument applied to things that people think of as inherently worthwhile.  "Oh no, look at all those books on the library shelves!  Someone should start limiting my choices so I'm not so confused!"

Hmm, I did say "Sarcasm aside," didn't I?  I do think that there's a variable that people are leaving out when discussing this issue:  That's the amount of knowledge that a person has about the topic.  One person's blurry morass of choices is another person's crystal-clear selection of well-known options.  (An example: To me, the wine aisle at the market is a scary, confusing place... but my wife goes in there and has a good old time selecting and exploring.)  Being the person I am, I started sketching out a 2D grid of possibilities, and it resulted in the following Choice-o-gram... 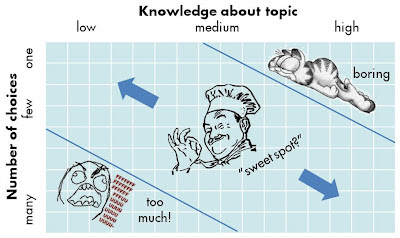 Click to enlarge, but you're not that bored, are you?
I think a case can be made that "Analysis paralysis" only occurs when one is not that knowledgeable about the ins and outs of a given range of choices.  The other extreme end of the spectrum is when the expert is confronted with too FEW choices, which can be a dull and boring experience.  The sweet spot in the middle slides around, depending on one's knowledge.

After I sketched out the above grid, I realized that I had seen it before in another guise:

Duh!  Combat in old-school RPGs works this way, too.  The range of situations in which one is healthily challenged (i.e., the fight is neither impossibly futile nor laughably easy) is a sliding scale that depends on your experience and skill.

Now, I should be clear that I'm not intending to tar anyone with this brush...  If you believe there are too many old-school retro-games out there, I don't mean to imply that you're "not knowledgeable" about these options!  There are plenty of reasons in heaven and earth, Horatio, why you may consider yourself done with new RPGs.  Curmudgeon that I am, I'm sure I'll hit that point myself some day!  :-)

Before I sign off this too-long post, I did want to mention Glass Bead Games, too.  There ARE potential "dark sides" to the quest for endless associations between ideas.  Hesse's novel warned of the dessicating effects of too much academic detachment. However, a more relevant warning here (i.e., related to choice overload) was articulated by Ron Hale-Evans in an article about his own bout with mental illness.  Sometimes the brain gets itself into a state where it seeks out connections between anything and everything, in an uncontrolled, chaotic way.  That's almost a definition of schizophrenia, but I think it can easily happen in someone with "normal" brain chemistry, too.  It's up to us to retain our balance, avoid overload, and maintain that sweet spot so we're up for the challenging choices the world throws at us...