The Architecture Of Color “Modern Life: Edward Hopper And His Time” Whitney Museum Of American Art 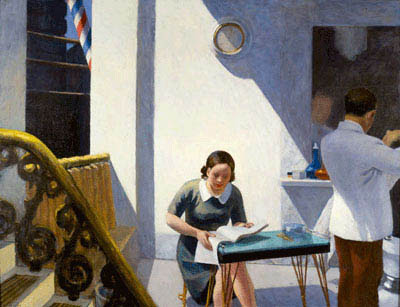 Edward Hopper, The Barber Shop, 1931, (Neuberger Museum of Art)By Kyle Gallup
The faceless, gold-rimmed clock hangs silently on the wall of the shop. A manicurist leafs through a magazine awaiting her next client. A smooth, aqua-glass table holds the instruments of her trade. The barber in his white jacket, back to us, cuts the hair of a customer. His featureless reflection is muted, a fuzzy oval in the mirror. The painting offers us a momentary look inside one of the city’s many barbershops, and we become observers of the placid scene.

A harsh light shines through the window throwing the interior into a bright white, casting cool purple shadows into the imagined space. Is it the midday sun shining in the window, or is it perhaps early morning? Peering outside, the buildings on the street are dark, showing only the slightest punctuation of windows in their facades. A solid, yellow curtain on the window holds back darkness outside. The stair banister of acid yellow-green heats up the interior. Its ornate scrolled metal, transparently painted in tones of brown and purple, angles into the shop, echoing the purple shadow cast into the room by the outside light. The light and shadow—cool and warm, bright white to dark tonalities—color the painting vividly. Edward Hopper uses the architecture of color to create an atmosphere we enter as viewers of his paintings.

Color is the dominant character in Hopper's work and it's what leads me into his world of cityscapes and small town life. Color and light inventively structure his scenes. They reveal solidity of form while creating ambiance and abstract relationships suggestive of time and place without making specific reference to it.

Edward Hopper’s work has long captured America’s imagination. His paintings have become iconic and he is, in popular culture, the painter of the Everyman. The idea that Hopper painted loneliness and alienation as the human condition has practically become a cliché. However, I believe this idea is actually outside the realm of what he thought or cared about. His interest and attention were in the color and light, geometry and space, making order in a rapidly changing world; a nineteenth century boy in a twentieth century world.

As a young man (b.1882) Edward Hopper lived in Paris. He visited museums and made drawings and paintings around the city. He was very interested in Degas’ work. Hopper took from Degas the idea that he could use intimacy as a way for the viewer to enter a painting, though he executed it differently. While Degas was the master observer with an eye for intimate moments with his subjects—the many sensitive drawings and paintings of ballet dancers and the pastel drawings of women in the bath, for instance—Hopper forges an intimate bond between the viewer of his paintings and himself. He paints his figures simply. Yet, their purpose within the composition is abstract and connected to his formal concerns. The figures go about their mundane tasks and do not have the monumentality that the buildings and urban scenes around them express.

The bond of intimacy with the viewer Hopper creates allows us into his world. He wants us to glimpse what he sees. When we look at his paintings we become a voyeur like the painter himself. Hopper exploits his figures, whether it’s seeing the naked pastiness of their skin through an apartment window or watching them go about the humdrum existence in which they are caught. His paintings are cool and lack human warmth—they remain emotionally remote. His figures are mannequins, lonely placeholders in a formal, finely orchestrated world. It is Hopper’s color that continually gives his paintings fullness and connects us to the inner workings of his private world.

Kyle Gallup is an artist who works in collage and watercolor.