The 8th And A Half Regeneration Of Christmas

Eighth and a half?  Well, after the Eighth Doctor, but prior to the Ninth, there was a brief incarnation played by esteemed actor John Hurt.  We only met Hurt's so-called "War Doctor" in November of this year, but his role in the life history of this thousand-year old time lord was pivotal. 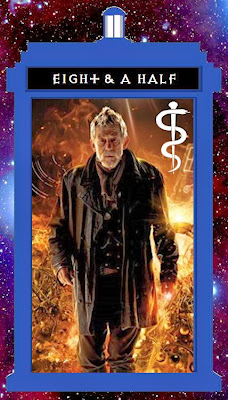 The last part of the Eighth Doctor's era was tainted by the Time War, a huge conflagration involving his people, the Time Lords, and their eternal enemies, the Daleks.  That war created so much collateral damage across space and time that when the Doctor met new people, they recoiled in fear when learning what he was.  He came to believe that a doctor -- a helper and healer -- was no longer needed.  To end the war, he needed to become a warrior.

(Of course, things aren't always what they seem.  Future incarnations were ashamed of the things they believed the War Doctor did, but it turns out... well, spoilers!)  :-)

Occurring outside the normal cycle of regenerations, the War Doctor doesn't have a Zodiac sign per se.  His place between Pisces and Aries does seem to fall naturally at the Vernal Equinox, a pivotal time that's been enshrined in Earthly cultures by renewal feasts such as Passover and Easter.

However, I kind of like to associate him with the constellation of OPHIUCHUS, whose stars intercept the classical Zodiac.  Some astrologers treat this as an honorary 13th astrological sign and give it the symbol of the snake-entwined Rod of Asclepius.  This is an international symbol for doctors and healers of all kinds, which is appropriate for the one incarnation of the Doctor who tried to cast off that mantle, but found that it was just too much a part of who he was.

[See the introduction for more about sources and motivations for this series of posts.]