It's our last full day in the US after a (BrE) holiday/(AmE) vacation of nearly a month.  I'd thought I'd catch up on blogging during this downtime, but I started to enjoy actually being on holiday/vacation. Imagine that!

As we rushed to get everything done before leaving my parents' house and my hometown, I asked Better Half to run across the street/road to the (AmE) drug store/(BrE) chemist's to buy a (AmE & BrE) greeting/(BrE) greetings card for my soon-to-be nine-year-old niece. He came back with a very (orig. AmE in this sense*) cute card that was arguably marketed at a younger age group, explaining (with alarm in his voice) that he couldn't bear to buy a (orig. AmE) tweenie-appropriate (not his words) card addressed to 'a spunky girl'.

An hour or so later, we searched with desperation for a place to have lunch with my parents. We'd checked in at the airport, but there is now nowhere in ROC to have anything but a cookie or a pretzel outside (of) the security zone, and our usual diner across the road had closed down. (We found later that JFK is no better--couldn't find a 'proper' restaurant in which to eat after collecting our luggage/before going to our foodless hotel. I blame Homeland Security. And, America, why don't you put sensible things in your airports after security? Like a drug store/chemist's where one could buy baby food and sunscreen in order to get around the 3-oz./100 ml rule? UK airports [orig. AmE i.t.s] rule, oh yeah!)  We ended up at a local (orig. AmE i.t.s) chain restaurant about which the less said, the better. But it thrilled by being in the same (orig./chiefly AmE i.t.s) plaza (i.e. set of retail businesses sharing a [AmE] parking lot/[BrE] car park) as this gym: 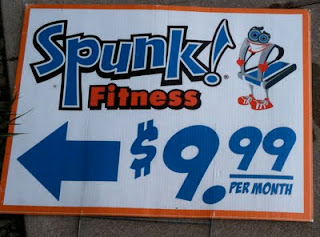 And this had BH clamo(u)ring** for a blog post on spunk.

Spunk came up, so to speak, in my last post, because the American Heritage Dictionary gave it as a synonym for gumption. And there I had the footnote:
* I've no doubt that some readers will find this definition humorous, as spunk is BrE slang for 'semen'. But the primary meaning in AmE (also found in BrE, and originating from a Scots/northern England dialect for 'spark') is 'Spirit, mettle; courage, pluck' (OED).
In the comments, a couple of US readers claimed familiarity with the 'semen' sense of spunk, but its use in US business names indicates that it is the 'spirit, mettle; courage, pluck' sense that is called to mind first in AmE. (My research has, however, led me to an adult entertainment business in Australia called "Spice and Spunk Strippers". You're welcome.) In BrE, the 'seminal fluid' meaning has been around since at least 1890, and the other meanings (of which there are many) have been around longer, but many of the other meanings (e.g. 'a spark', 'a match', 'a lively person') seem to be more rooted in northern dialects and may not have had much currency down south when the 'semen' meaning took off. Two meanings that aren't marked as dialectal in the OED are 'tinder' and 'One or other of various fungi or fungoid growths on trees, esp. those of the species Polyporus, freq. used in the preparation of tinder'--and perhaps it is that sense from which the 'semen' sense comes (here's a photo of the fungus, you can judge).

Spunky meaning 'Full of spunk or spirit; courageous, mettlesome, spirited' is not marked as dialectal in the OED, but some of the earliest citations seem to be Scottish. (Well the first one, Burns, definitely is, and the second one has the word lassie in it. For some reason the links to the OED sources aren't working for me.) There is no 'semen-y' meaning in the OED, but it certainly exists. The OED does include a 'US & dial' meaning 'Angry, irritable, irascible', but that's not a sense that I hear used, and the citations are all from the 19th century.

At any rate, the semen sense seems to have taken over British minds--or at least the minds of the under-50s, as far as I can tell. I'd be interested to hear whether people in other parts of the UK have the same impression of the spunk(y) situation. Americans, meanwhile, mostly use the word in with positive connotations--and with a definite feminine bias. Here are the top nouns that follow spunky in the Corpus of Contemporary American English:

So, this is yet another example of Americans innocently using words that sound "dirty" in BrE. And before you comment, please note that there is a £5 tax on this blog for typing fanny pack.***

Oh--and before I go:
If you've ever wondered what a Lynneguist sounds like (after 12 years of anglification), wonder no more! Patrick Cox's latest World in Words podcast is an interview with me about all sorts of things, like how my immigrant vowels have shifted, criticism-softening devices in BrE, and language and social class. He promises a part 2 after his holiday. I had a lovely time (that's me all Britified) speaking with him, as we have converse experiences--he's an Englishman living in the US. I hope it might be of interest to some of you too...


*There are several 'in this sense' originally-AmE items here, so henceforth I abbreviate 'in this sense' as 'i.t.s'.
** Quote: "You could blog about that."
*** Payable to: http://www.msf.org/