This is post 2 out of 25 in the Cygnus Series of a September of Short Adventures.

This scenario is a hybrid of two different ideas that were going to go on separate days, but like chocolate and peanut butter, I think they go great together! :-)

In an inn, tavern, or crowded market square, one of the PCs (who appears to be the most sympathetic to strangers) is approached by a tall woman wearing upper-class, but slightly worn, clothing. She looks to be in her mid 40s, but her jet black hair and dark eyes still shine. She introduces herself as Athena of Montfort, and she doesn't have much time. She weaves a sorry tale of abuse at the hands of her evil husband. He beats her, he keeps her locked up most every day, and so on. It's only by a miracle that she bribed the guards to let her out this one day while her husband is traveling to judge a case in the outermost boroughs of the town. Please, please, help her escape to find a new life!

Athena's husband is Frederick of Montfort, burgher and chief judge of the town (which FYI is not named Montfort). He's at least 15-20 years older than her, graying hair, with an ugly, acne-scarred face. He's got power in the town and he likes exercising it, but his family wasn't so noble of birth that he can ever ascend to the pinnacles of local power. Everyone knows he's a mean dude and a strict judge, but nobody really knows him well.

Okay, DMs, you need to know what's really going on, so I won't write this like a story with the big reveal at the end... Athena may be deceitful about some things, but she's not lying about being held against her will. She is a succubus, and Frederick is an evil high-level magic-user who keeps her here on Earth in a continuously weakened state. He does harbor twisted love for her (think of the Bishop from Ladyhawke), and he considers her to be his most prized "magic item" from his adventuring days.

Frederick is at least a 15th level magic-user, and he keeps Athena's Demon's Amulet on his person at all times. He also casts frequent spells to keep her polymorphed in human form and at low hit point levels.

After first meeting the PCs, Athena flees can cannot be found in public. She headed back home in obedience to other evil dweomers that Frederick keeps going.  (She succeeded at a saving throw to resist it just for the hour or so that she escaped to find help -- but that hardly ever occurs.)  If encountered at other times, she will appear the happy, faithful wife of the respected town judge and give no indication of having met the PCs before.

If the PCs investigate, they will find out that the judge spends much of his time, and sometimes judges cases, at home in his stately estate, White Horse Manor. I won't provide a detailed map of the manor, but I do need to show a rough sketch to explain that things aren't quite... normal... 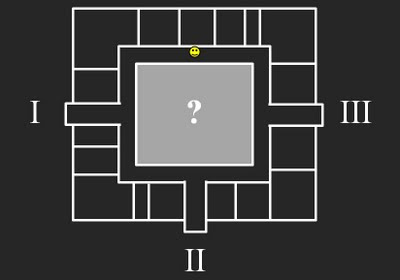 White Horse Manor is a masterpiece of crafty magic use.  After spending time in the Abyss as an adventurer (where he first saw and fell in love with Athena), Frederick got a feel for extradimensional weirdness and modeled his home on some of the Escher-like paradoxes he saw on other planes. Upon entering any of the numbered doors, one enters into the main hallway that lets you circumnavigate the house. However, there are really FOUR main hallways occupying that space! Each door brings you into versions I, II, or III of the hallway. Traversing the hallway clockwise past a certain statue (identified by the smiley-face) transports you to the next higher numbered hallway. Going back past the statue counterclockwise does nothing; i.e., it keeps you in the same "universe."

The eyes of the statue provide a hint to what's going on... They are different in each universe: (I) both closed, (II) left closed, right open, (III) right closed, left open, (IV) both open.

From the outside, one can see that the central area of the house (the gray inner box) rises 3 stories as a stately tower. But there is no way to find the upward spiral staircase to the tower unless one reaches universe IV. On the top floor of the tower is Frederick's laboratory, which is well-guarded by both magical wards and by statues of various vile creatures that come to life to defend him and his property.

Some other details: Frederick employs 3 different sets of menial laborers, who are allowed entrance into only one of the doors. These people are enchanted so that they stay in their own universe (I, II, or III) no matter how they pass the statue. There are also magical detection devices all over the house; if there are intruders, they will set in motion some of the living statues to attack, and they will warn Frederick if he is in the house.

If Frederick is weakened to only a handful of hit points, Athena will be freed enough to come and try to kill him herself.  She is still an evil demon, but she may not attack the PCs if they helped her. If Frederick is killed, he will have her Demon's Amulet on his person, along with a strange key that looks like it's made of bone, and has the image of a white horse carved in it. This key doesn't unlock anything in the house.

There's so much more that needs to be done to flesh this out, but I thought the ideas were neat enough to package up at this level and share. And yes, some pop culture inspiration seeped through here:  go listen to this song by the Who while reading this short story by Robert Heinlein.  :-)