This is post 22 out of 25 in the Cygnus Series of a September of Short Adventures.

An ocean-going salvage adventure with bickering brothers, a major magic item, and some slimy savages...

The PCs have now received some share of experience and reputation. One day while puttering around a seacoast town, they are approached by two older gentlemen -- who also happen to be twin brothers -- with an offer to get in on their sure-fire investment. They're just a few thousand GP short of being able to hire a sturdy sea vessel, which they need to find a fabled shipwreck (maybe this one??) and the even-more-fabled treasure aboard.

The brothers are Alatar, a grizzled old seaman, and Pallando, a grizzled old magic-user. The treasure they seek is a huge (two foot wide) spiral-shaped chambered nautilus called the Mother of Pearls. It is reputed to magically generate valuable pearls when its holder says a magic word (and both the nautilus and the speaker are both underwater). Potentially infinite wealth!

If the PCs agree to the plan, they begin scouting for worthy ships to carry them and their equipment. Unfortunately, both Alatar and Pallando find two different ships, and they get into a huge argument about which one to hire. They each go storming off to different pubs and begin drinking. PCs who remain with either one will hear about a lifetime's worth of grudges and recriminations.

There's no getting them back together, so they both pawn some valued items, reduce their expectations a bit, and then each aim to hire a ship and some worthy hands. It's now a race!  Do the PCs split their party, or do they choose sides in this fraternal rivalry? If one side gets to the wreck soon after the other, will the rivalry escalate into open melee?

Each brother has a roughly-copied "treasure map" of how to find the shipwreck. Alatar knows the sea well, so he will be more likely to find the spot sooner. However, Pallando is the one with the stockpile of Potions of Water Breathing, so that divers can explore around underwater (each lets one breathe underwater for 1 hour + 1d10 uncertain minutes). Much of the fun here is in exploring the sea-lanes near the coast. I suggest building the sea map in several stages:
Create a hex-map of the shoreline and the overall topography of sea depth. Use 3 discrete depth levels: "shallow" nearest the shore, "medium" further out, then "deep" still further away. Insert some deep hexes unexpectedly in the middle of some shallow and medium areas. Also add a couple of islands and a few patches with dangerous jutting rocks, some of which won't be on the treasure map....Place the desired shipwreck in a random deep region, and have the map's "X marks the spot" be approximately one hex distant from the true location. Put two other sunken ships (red herrings) nearby. Also decide on the location of the Locathah village (see below), which is hidden in a dense kelp forest in a medium-depth region.Then it's time to add in some flavor. The sea floor of each hex can be one of three types (roll 1d3): 1: flat sand-bed, 2: rolling sandy hills, 3: sea grasses.Also, for each hex roll 1d100 to see what else may be there:01-03: lone mountain
04-06: seething underwater volcano
07-10: coral reef
11-15: oyster/clam fields
16-18: ruins of underwater city
19-27: dense kelp forest
28-29: unexplained whirlpool
30-39: wandering monster encounter (see DMG Appendix C: Underwater Encounters in Large Bodies of Salt Water)
40-100: nothingDon't forget to generate some weather for a few weeks worth of sailing. Please also flesh out the doings with Zak's wavecrawl kit, or JD Jarvis' sea encounter tables, or Charlatan's saltbox rules.

Resource management: There are only so many Potions of Water Breathing available. The number will depend on the chosen size and scale of the oceanic hexmap. I suggest also that the deepest depth level also requires PCs with strength below 17 to drink a Potion of Giant Strength (or something equivalent) to strengthen his or her lungs and muscles, to be able to withstand the pressure. Pallando has only a handful of these potions! 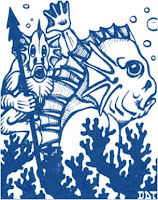 If PCs explore the hex containing the Locathah village, they will initially just see dense kelp forest. If they keep exploring it for more than a half hour, they'll encounter a wandering Locathah patrol, which will attack.

When PCs get to the shipwreck, they'll find that the Mother of Pearls is gone! A generation ago, it was found by Locathah tribesmen and taken to their undersea village. It's spiral shape made them believe it's a holy relic of their god Eadro -- and they safeguard it and worship it. But they don't know its magic trigger word, so they don't know its pearl-making secret.

What will the PCs do?

By the way, some other ideas for playing through an ocean-going salvage operation are found in Lloyd Krassner's game Wreckers. Further ideas for developing the Locathah village can be easily mined from the Sahuagin village described here.