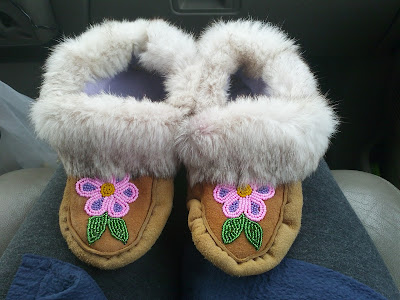 I'm getting married in these shoes...
Kevin asked me in June. I said I'd think about it. If you know me, this isn't all that surprising.

We've been together for 7 1/2 years now, and known each other for over 8. Time flies.

I finally decided. I considered waiting for next summer, so we could plan better, but no one really appreciated that idea, and so we decided to go forward with a small ceremony, lots of food and drink, and then later we'll take the time to plan a big party for all our friends in Tok, and also a BBQ for our friends and family back in Ontario (or anywhere it's easier to travel to Ontario than it is Alaska) that want to make the trek to the farm.

It means a lot to both of us to be getting married not only in Alaska, but in Tok with our close friends here.

Our very dear friend, Buddy, is going to marry us. In Alaska it is legal for anyone you choose to marry you, the State just has to give approval to that person and for a certain day.

Buddy said he would marry us, which was amazing. It means a lot to us. We'll have a small ceremony at our other close friends house... they have a beautiful house and garden, which hopefully will still be blooming on the weekend if a big frost doesn't hit us before then.

Another friend is making our rings for us, one of a kind. She is a retired gold  miner and has been making beautiful jewelry for many years. I don't dislike jewelry, or diamonds, but buying an expensive ring from a shop in the city just doesn't mean that much to me. But having someone special make them for us, that makes it so much more special, and the rings will hold extra meaning.

We bought these Moccasins from another dear friend, and I'll wear them for the wedding. Then I'll take them home and we'll put them in a shadow box to keep them safe. They cost as much as my dress! :) But they hold a great deal of meaning as well.

To top it all off, we'll have a fish fry, and a bunch of homemade salads, pies, and cakes. I'm making a pie and some cupcakes, and everyone else is contributing a dish for the meal.

It doesn't escape us that over 8 years ago, the reason Kevin & I met is because of his dog Buddy, running away and coming to my farm.

Now we'll be getting married by our dear friend, also Buddy. :)

The world works in mysterious ways.