As usual, spring has decided to give us a little taste of all the seasons at once. It's been fun... mostly.

Today it's snowing, and the goats wanted nothing to do with heavy rain that turned into heavy wet snow, so they stayed inside where it was dry, and warm.

Flavious however took full advantage of the mud... he loves it. At least this time it's not manure... he also loves that.

Things have been fairly busy here. Breakup brings lots of mud and makes it hard to get around the farm - it's not a good time for visitors, or a good time for us to have to leave the farm for any reason since most of our road is usually waist deep in mud or washed out. We were not sure if it was going to be much of a year for maple syrup, but although late compared to the past several years, the sap did run we started boiling right after my last post.

This was the road to the sugar shack, and a perfect example of what I mean by "breakup" and not "driving the roads." Just a wee bit of a mess.

We got a surprising amount of sap, and it ran really good for a while.

The guys boiled for 5 or 6 days straight. It's a big and looong job. Although usually we stay in the sugar house boiling until midnight or later, Kevin quit by about 7:30 each night so he could get some rest. I wasn't as involved as usual this year because of my health, but it was Jim's first time ever making syrup and he was quite excited to be able to help and be a part of it.

Bottling is a huge job... half of it got done in the sugar shack and then we moved the operation to the house, to our sun porch, where Kevin and I finished it the other day. We got 4 gallons of syrup which for us, is plenty. We could have got a lot more, but we do this for fun, so when the exhaustion kicks in or other projects need to be done, it's time to stop. The syrup this year is the best we've ever made - we've made lots of good syrup before but this is the darkest richest syrup we have made, and the maple flavor is nice and deep.

Once the syrup was finished it was time to get out and seed our hay fields before all the snow went - it's best to seed them when it's still wet in the spring. We bought a little seeder for the ATV and we seeded about 15 acres... our fields are small pioneer fields that were cut out of the forest, all spread out over our acreage... a few of the best ones we cannot reach since with our machinery - they were build for horses and still only accessible by them, or by foot. They haven't been used since 1952 for hay until we cut them last year. A couple of them already have a lot of timothy in them but they need to be thickened up, which takes time... we are hoping at least some of the seed will take though and give us a little more bulk this summer.

The absolute best news that I have is that the deer have come back! Never in the past decade have we spent a winter without our deer friends until this one. The heavy snow, ice, and cold temperatures caused the deer to all yard up together after Christmas, mostly for protection against the predators... we haven't even seen a deer or deer track since then. Not on our property, but also not in this area at all. A few days ago Kevin spotted some tracks nearby and within a day the deer started to show up, Deer Norman, our buck, included. It was a huge relief to see them, and know they are OK. They won't stay long now since they always move on in the spring, but we are enjoying having them around daily now again. We missed them terribly. It's been such a long and strange winter here with my health, Kevin's health, the deer being gone, and such long lasting bitter cold... We, like a lot of you, sure are glad to be on the backside of it.

My bottle baby Lavender is doing great, and growing like a weed!

It's hard to believe she's only just over a month old, she's double the size of the other kids! 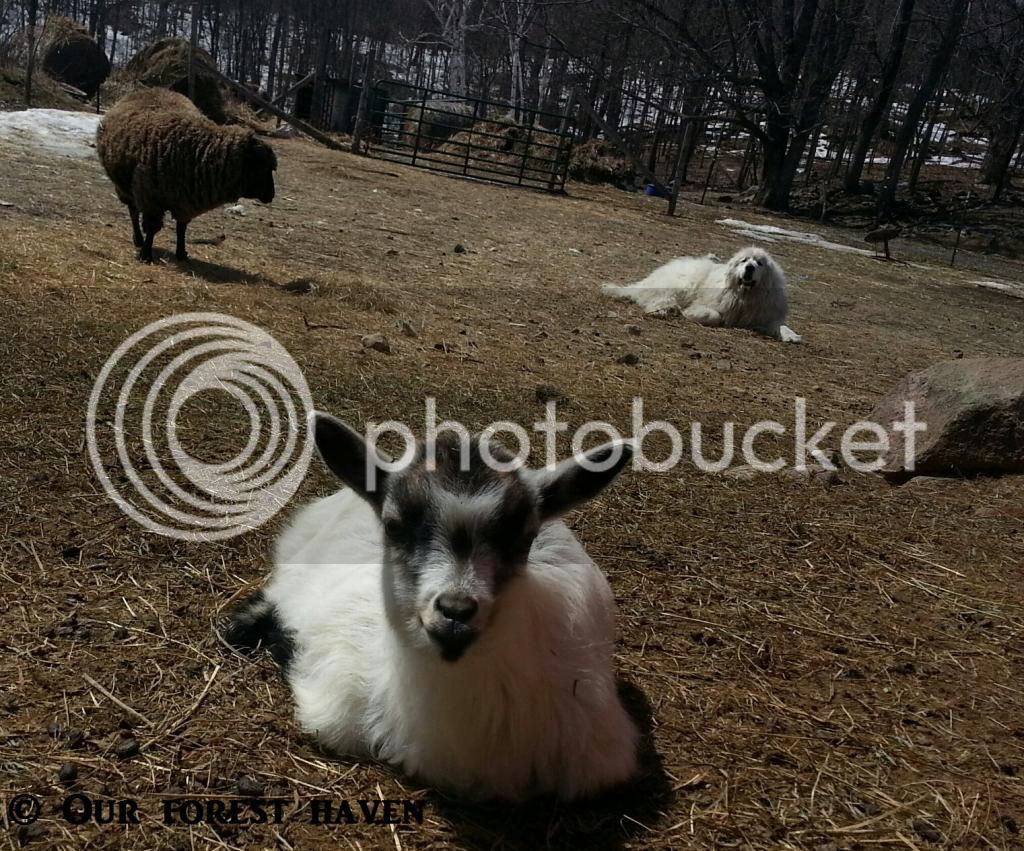 All of this years kids are doing really well. I cannot believe I ended up with FIVE boys this year and only one girl, but I expected as much since most of my does give me opposites every year, but still - that's a lot of boys! Hopefully later in the spring or early summer I'll be able to find all of them really good homes. This guy, little Hickory is so precious, he loves to snuggle.

The dogs are missing the snow but adjusting. Horace, my Black Welsh wether thinks he has special control over them, seeing they drop at his feet whenever he walks by... ;)

The turkeys have been very busy strutting their stuff... showing off for the girls... and everyone else too...

And we had all been enjoying the warmer weather, until today. On the weekend I even got to sit outside and work on some jewelry for a while... the boys were so happy to be out on the porch again.

Which I have enjoyed immensely... I look forward to being strong enough to take four or five hour hikes again like we used to but it feels so good to be able to get out and about a little bit.

Kevin made an amazing find the other day! Just behind our sugar shack, in one of our hay fields he found a Timberdoodle, AKA Woodcock, sitting on her nest! She jumped up and flew in front of him and he saw there was one freshly laid egg in there. It's incredible. They are my favorite birds, along with the Whip-poor-Wills... it's amazing how much their feathers look like leaf litter and the ground, they blend so well..which they have to, it's hard to believe they just lay their nests out in an open field on the ground. I have been waiting patiently for the male who lives at the creek outside our bedroom to come back, in the spring evenings he calls (meeps) for the ladies and I love listening to him. These guys are really difficult to spot, so I was so excited we were able to find this girl actually sitting on her nest. In about 20 days she might have new babies too.

It's cold this evening and we are all tucked in by the fire just waiting for this to pass. I took advantage of the cold and made a huge pot of soup and the wood stove is roaring away.