[This is the 15th of my April A-Z Challenge series of posts on Symbols, Glyphs, and Sigils. Each day I'll try to include some material that old-school role-playing gamers will find useful, but I can't guarantee that there won't also just be a few posts filled with weirdness for the sake of weirdness....]

Since I've already got plans for R, today's loose talk about RUMORS (no, not the album) has to be filed under something else.  Two French terms for hearsay: oui dire ("yes for the ears") and on dit ("they say...") are as good as anything else. :-)  I don't have much profound to say about why rumors spread, or why we like to hear them... this is a very practical RPG-related post. 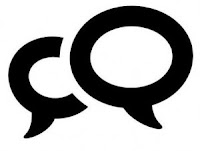 There is no established symbol or pictogram for a rumor, but the tech community became intrigued recently when Apple trademarked this symbol for something in development called "Ping."  I don't know if anything more is known now about it, but from the look of the symbol, rumors began to spread that Apple is getting into the social networking game.  Anyway, I thought the symbol itself could serve quite nicely as an intuitive representation of a "rumor" itself!

Anyway, GMs in role-playing games sometimes like to stir the pot by spreading rumors -- often when the characters wander into the local tavern.  GMs with lots of time to prepare sometimes even have custom-built tables containing brief snippets of gossip for different locales in their imagined world.  I fondly remember Len Lakofka's adventure L1: The Secret of Bone Hill, that presented a fun list, with true ones mixed in with false ones.  Some modern-day GMs let the computer do the randomizing, too (see this list of 200+ generic town rumors).

However interesting the content of the rumor tables, the method of rumor delivery is often pretty ham-handed.  Here's 1d8 worth of ideas that venture beyond stereotypical whispers at the local watering hole...

Alternate Rumor Delivery Methods
On the street, a PC runs into a NPC they know well (friend/contact? enemy? family member? merchant or tavern-keeper the PC does business with?), and the NPC feels the need to fill them in.The PCs are walking around.  They turn a corner and overhear two NPCs whispering to one other about what's going on.The PCs see wanted posters or other written announcements.The PCs get stopped by local guards/constables.  Why is the whole town on alert?Everyone in town has gathered... it's either a proclamation by the town crier, or (depending on what's going on) a public trial, ceremony, or execution...The PCs happen upon a dead body.  Investigation will show the person was carrying an important message that lays the seeds for some interesting goings-on.Random person (unknown to PCs) goes up to a PC and says "Hey... are you XXX?" No, they're not, but it's an excuse to talk about why the NPC is interested.Related variation on the above: If the PCs are well known, then the random person DID hear a rumor about that PC!  But it's been mashed up -- some truth, some WTF -- with the latter weirdness relating to the rumor that the GM really wants to deliver.There's nothing astonishingly new about the above, but harried GMs may appreciate having options like these in one easy-to-find list.

I guess the only other thing I have to say about rumors is that they're a member of that rare class of nouns that can still be appended to the word "MONGER."  It used to be used for sellers of all kinds, but these days it's pretty much only for dealers in rumors, fish, and war!  :-)