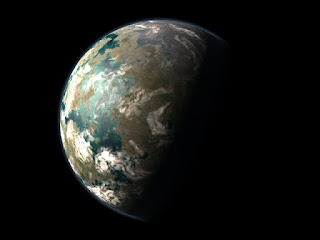 The Chapter calls home to Korak Prime, a secluded system on the edge of the Maelstrom. The binary system of Korak is fraught with unpredictable, if short-lived, warp storms which periodically cut the region of space off from the rest of the Imperium. Korak Prime exhibits a unique orbit within the system and follows a figure-eight pattern around both stars. This unique orbit causes periods of harsh draught when the planet passes between the stars. The people of Korak Prime live simple lives with much time spent rationing their limited supplies as the arrival of inter-system supplies is less than regular. The annual dry period forces the populace to roam the surface in search of fresh surface water to bring back to their home villages...

This lifestyle has moulded the Night Hawks into the chapter as they are today. Following in the traditions of the White Scars, the Chapter focuses on rapid deployment and hit and run tactics. While the White Scars prefer to launch lightning fast strikes, the Night Hawks have perfected the art of hitting targets of opportunity before rapidly redeploying without the need to re-supply. A small contingent of Night Hawks cannot only change the tide of a battle but that of a war spanning an entire continent.

Beliefs
The people of Korak Prime are a spiritual people believing that the path of survival begins within oneself and practice an ancient form of numerology. Imperial anthropologists have traced the roots of these practices to the Gyptians of ancient Terra. The Night Hawks take portions of these beliefs with them through their transformation from tribesman to Space Marine. The number 9 has become sacred to the Chapter and shapes their organization. The ancient Gyptians believed that the planetary aspect of the number 9 was the moon; symbolic of the night. The Nine is the number of the unconscious and is seen as a regulator, resolving any discrepancies between the seven (experience) and the eight (instinct). Because of this, the Nine can be seen as the interface between the inner and outer self. Only by understanding the inner and outer self can one truly hold the corrupting taint of Chaos at bay.

Village elders routinely wear a simple tabard emblazoned with the heraldry of the village’s people. Upon recognition of veteran status, a Night Hawk dons a tabard bearing the Night Hawk crest.

The symbol of the Night Hawks is a winged talon wielding a sword. This symbolizes the Chapter’s doctrine of swiftly bringing might to bear.

Combat Doctrine
The Night Hawks are often tasked with undertaking prolonged missions behind enemy lines where abnormal weather systems or warp interference may prevent re-supply from orbit or even beyond system space. Preferring to operate at night, in contravention of the standard brightly armoured shock troop renowned across the Imperium, the Night Hawks prefer the subdued nature of their chapter colours. The fear induced on an unsuspecting enemy hit by a Night Hawks’ attack far surpasses that caused by a brightly coloured uniform.

Organization
At full strength, the Chapter is made up of 9 companies. The 1st company is comprised of ninety veterans of the Chapter who ride Mars-pattern hover bikes in contrast to the standard tactical dreadnaught armour worn by codex chapter’s first companies. Captains of the Chapter’s companies form their command squads from members of the 1st as opposed to members of their own companies. Veterans of the company can best prove their worth and learn first hand those skills which may someday be required if their station rises to that of captain. The 2nd through 5th companies are made up of bike and assault bike squadrons totalling 90 marines and form the battle companies of the champter. These marines form 10 man groups dubbed ‘Murders’ reminiscent of the tactical squads of codex chapters. The sixth and seventh companies are reserve companies formed of 90 battle brothers on bikes and assault bikes respectively. The 8th company, or the “Hand of Eden", consists of 45 versatile Argonaught Land Speeders and the 90 crew required to operate them. The 9th company consists of the initiates of the Chapter who sit at the crossroads of the journey to master their inner and outer selves.

Due to each marine being issued a Space Marine bike and the large component of Argonaughts which make up the 8th company, the Chapter has formed a strong bond with the Adepts of Mars. Over 30 techmarines are currently present within the Chapter and routinely accompany the Night Hawks to battle operating Argonaughts and performing field repairs during prolonged deployments.

Maintaining such a vast stock of equipment requires a vast portion of the chapters allotted wargear and as such tanks and drop pods are a rare commodity. Such ancient relics are held within the chapter armoury for all but the most dire of circumstances.

Gene-seed
Imperial records indicate that the Night Hawks Chapter was founded during the ninth founding early on in M33 from the White Scars’ gene-seed. The gene-seed appears stable if not more-so than that of the White Scars. Any apparent uncontrollable ferocity periodically displayed by the White Scars has not translated to the Night Hawks. Whether this is attributable to the meditations of the Marines or the stock in which their initiates are chosen is unknown.

Battlecry
“You are your own undoing!"

Armoury
The Night Hawks Chapter utilizes equipment not common to the Adeptus Astartes. Included among this list is the Mars-pattern hover bike. This STC was recovered from the 3rd moon of Korak Secundus late in M40. Following centuries of review by the Adepts of Mars, production on these bikes began and preliminary shipments were directed to the Night Hawks’ for use among the 1st company. The hover bike is not a true jetbike and is not capable of attaining heights of more than 1 metre above the ground's surface. What the hover bike does achieve is the ability to traverse uneven terrain with greater ease than a standard bike. The hover bike is also incapable of traversing bodies of water with a depth greater than 1 m as the gravemetric displacment field employed by the bike does not work with fluids.

The Argonaught-varient land speeder was created in M38.657 on the forge world of Aritek. The adept Primalus had a shortfall of the materials required to create the anti-grav plating which provides the land speeder with it’s low altitude flight abilities. The A ground-based land speeder variant was thereby created in an attempt to fulfill the battlefield role of a light assault vehicle. It was quickly realized that the lack of anti-grav plating and the systems required for it greatly increased the available cargo capacity of the vehicle. Though falling out of favour in the eyes of many of the Astartes, the Night Hawks found this new variant to compliment their combat doctrine almost perfectly. The drawback of being ground-based was of little concern as the Chapter utilized them as a long-range support vehicle capable of carrying their much needed supplies; the benefits far outweighing the costs. The reduction in materials required to construct the variant also weighed heavily in its favour as the Chapter already devoted much of its resources to bikes.