I have a little file of things I've looked up and should blog about some day, and in it is this: 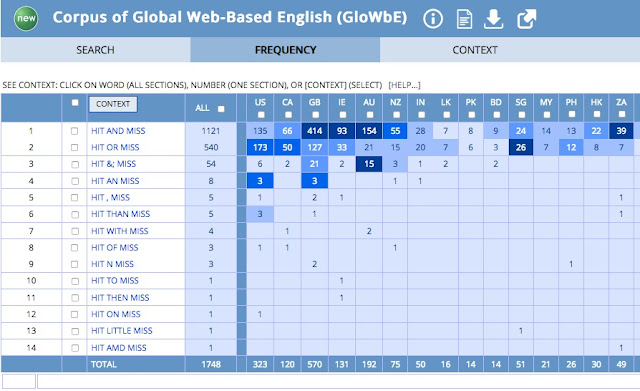 But while that was mo(u)ldering away in my desktop folder, Lauren Gawne aka Superlinguo actually did something about it. You can read her blog post on the subject here, but here's an extract.
Google n-gram confirmed variation in UK and US English, with and being the preferred form in the UK these days, and or found in US English. This didn’t appear to always be the case - hit or miss was also more common in UK texts in Google’s corpus until a couple of decades ago. [see her blog for the picture!]The OED has hit or miss going back to at least the early 1600s, while the earliest hit and miss is 1897, which also fits with the n-gram viewer.I wish I'd been thinking about this yesterday, when I recorded an episode of BBC Radio 4's Word of Mouth with Matthew Engel, who is writing a book about the American "conquest" (his word) of the British language. It's such a clear example of British English changing something and American not. Contrary to the fear that American English is 'taking over' British English, British is very happily doing its own thing without regard for Americans in this case (and many others).

I will post a link to the 'events and media' page when I know the date of the Word of Mouth broadcast. (I'm told it's probably the last one in February.) And I'll put a link to the podcast version when that's available.