I'm not sure if this will become a multi-post series or not, but I discovered something today that would be an interesting single "move" in a Glass Bead Game.  (See here if you're not sure what GBGs are all about.)

My old GBG mentor, Charles Cameron, often focused on interesting "pairings" of ideas that contained a chiaroscuro of similarities and differences. A favorite example was to compare the lush musical work The Lark Ascending, by Vaughan Williams, with a fiery excerpt from T. S. Eliot's poem Little Gidding, which begins with "The Dove Descending..."  Charles described the almost mystical attempt to perceive both items being juxtaposed and merging them (in one's mind's eye) into a unique third thing.

In 1982, the Canadian rock band Rush put out an album with two songs on it that were kind of juxtaposable in the above way:  The Analog Kid and Digital Man. The first song was a wistful, Romantic reverie about a young person about to leave home and begin to see the wider world.  The second was a more jaded look at an adult who is beginning to have too much of the world, and wants to escape back to reverie.  These two songs were pretty much designed as a matched pair, so it was never a huge challenge to figure out their similarities and differences.

Today, I heard a new song by an old artist that, unintentionally I'm sure, called back to this matched pair from the early 1980s.  Good old Joe Walsh always makes me smile.  His new song is called Analog Man, and it's a fun rebuff to modern-day Internet living...

The whole world's living in a digital dream
it's not really there
it's all on the screen
makes me forget who I am...
I'm an analog man.
It's light and fluffy compared to Rush's densely packed lyrics, but one can find parallels to both songs in Rush's analog/digital pair.  I'm sure it echoes the sentiments of that unnamed adult protagonist of Digital Man, who wants to run away to a Tropic Isle of Avalon... 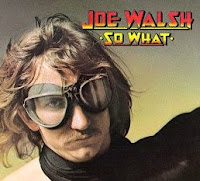