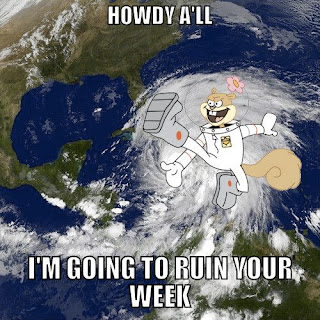 Release the Kraken!  We're bracing for Hurricane Sandy here on the east coast of the US.  Cygnus Central is hundreds of miles away from the projected path, but we're expected to get lots of rain, 30-40 mph wind gusts, and possibly power outages.  In doing some searching for the above image, I also found an old-school RPG discussion of treating a Maelstrom as a "monster" rather than a mere environmental event.  It certainly feels like a determined foe right now!I reviewed a book by John Calvin Batchelor a few months ago on the blog.  More random internet hopping tonight revealed that I could listen to him live, right now, on the radio if I wanted to.  (He's now a talk-show host.)  Politics aside, I'm not sure if I want to listen, just because that book means so much to me and I worry about ruining it...I'm still pondering the Right Stuff RPG and slowly building lists and forked trees of missions and events.  Slow going because of teaching and other things.I've also been saving up some of the oddest of the odd search terms that I've found in my Blogger traffic sources.  If anyone reading this got here by way of one of these terms, more power to ya!  (But I can't resist riffing on them...)
"Foundation trilogy cartoon:"  If only Max Fleischer had done that!"Skeeball wizard:"  Kevin Smith is doing a remake of the Who's rock opera."I Ching sword:"  New magic item for Oriental Adventures!"Bardic grade:"  I just see a medieval Simon Cowell making snarky remarks about minstrels in a tavern."Veve 3D:"  Heck, I'm scared of them in 2D!"American gesture connected with nose:"  So, why do they call you Booger, anyway?  (Revenge of the Nerds reference)"Avatar airbender p*rn:"  Why, Rule 34, why?"Enochian miniatures:"  Pew pew!  A 28mm Edward Kelley just destroyed John Dee's obsidian mirror!Be safe, fellow east coasters!