Fighting On Through The D&D 30 Day Challenge

The Non-Player Character (NPC) is often the Dungeon Master's trusty outlet for misdirection, MacGuffin plot development, and overall hamming it up.  However, I don't know if I can recall any of my own NPCs by name -- other than a few famous denizens of Middle Earth who appeared that time I popped everyone through a dimensional rift.

What I can remember is my most embarrassing bit of NPC acting as a DM.  It was definitely during high school... probably age 16 for me.  The NPC was a minor bad-guy, sort of comic relief prior to the players encountering the real villain.  Earlier that day, I remember clearly that a TV show I usually watched was pre-empted for something else... something that skewed distinctly, um, younger in its intended demographic than what was usually on at that time. 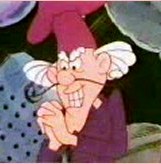 Yes, it was Strawberry Shortcake.  To my later regret, I was too lazy to get up and change the channel (no remote control!), and I watched it.  The bad guy on that show was the Purple Pie-Man, and he did a little ha-cha-cha sort of short song when announcing his presence.  That song stuck in my brain like super glue, and I ended up using it for the comic-relief NPC.

Being an only child, it kind of slipped my mind that several of my friends at the table had younger siblings who would be watching a show like this on the big family TV, and that the older sib might have absorbed it by osmosis.  I was caught!  The ribbing was fierce, but short-lived.  :-)

Got to be all of the bat-poop crazy variants on the undead from the Fiend Folio.  Artist Russ Nicholson gave vibrant life to those wild British imports.

Aren't they all horrific aberrations of nature?  Still, the morkoth might take the cake for having the most chilling and creepy image in the 1st edition Monster Manual.

Gotta be wolves.  Not only does the howling foreshadow all kinds of primal terror, but if the sound comes from multiple directions, then the players may just be outnumbered... and surrounded!

I think the Rakshasa falls in this category.  Nowhere else in the original Monster Manual is there a sentence filled with such foreboding as the first line of their entry:
"Known first in India, these evil spirits encased in flesh are spreading."Some treat them as crafty, but still beast-like at heart.  I'd tend to treat them with more subtlety... maybe using their ESP and illusion powers to go undercover in human society... having patience for a big payoff down the road.  I used them in this way in this short adventure concept as proprietors of a gambling den.

You know, I think these questions might just be a tad padded with fluff to get up to the magic number of 30.

The biggest guys... giants, titans, ettins... fascinated me quite a bit.  Probably because they came in a colorful palette of types (like the dragons and demons) but still had more-or-less human societies and foibles -- kind of like mortal versions of the gods.  At the risk of plugging another old post, I suggested a random giant generation system for people who wanted to spring something new on players.

A giant, ancient red dragon always seemed to be most appropriate for being a party's classic, eternal, elusive foe.  One of my friends from high school was a master storyteller of a DM who, over the course of years, caused us to just seethe with hate when we encountered the dreaded Ignis Unus.  (I have a feeling that's not perfect Latin for "The Fiery One," but we didn't care!)  :-)

But my own favorite type of dragon goes off that beaten path.  I always loved the idea of the tiny little pseudo-dragon most of all. 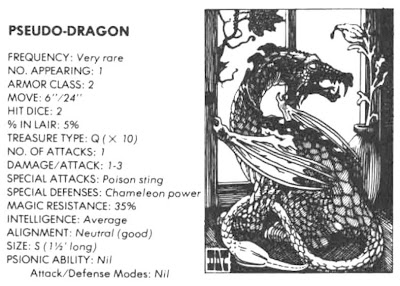 It's approximately the same size and disposition as a house-cat, and can communicate with its master via telepathy.  It can also blend into its surroundings like a chameleon and sting its enemies with its lightning-sharp tail.  Okay, it may be a bit of nerdish wish fulfillment, but you can't deny the coolness of the concept!  :-)