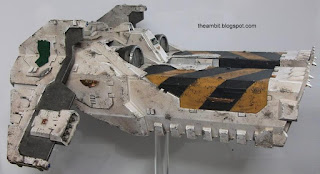 I finished painting my Space Marine Caestus Assault ram.  Man is it huge.  The model definately has a presence on the battlefield and I used it in its first apocalypse game last weekend.  I loaded it up with 400 points of stuff which was a bit foolish but when it did get somewhere things died. 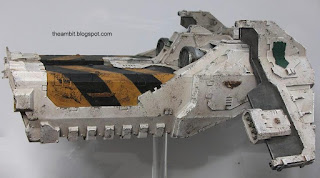 There weren't any panels that really screamed 'green' to me so I stuck with the model being mostly cream coloured.  I figured that the chevrons were eye catching enough and I was worried that forcing green anywhere beyond the fist would make the model too noisy.  I used house paint masking tape which is pretty crappy stuff but it worked well enough.  There was some bleed under the tape but because I sprayed the yellow last, the touch up was black paint which is far easier to get coverage. 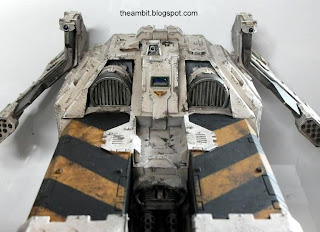 Beyond that, I sponged black paint on the boundary between the two colours which also broke up any imperfection from the spray process.  After this process was done (and I'd taken photos) I decided to add some decals to the front light mounts (a number 2).  I made sure to spong a cream colour onto the decal to make it look worn which is important on a battle damaged vehicle or else it looks really out of place. 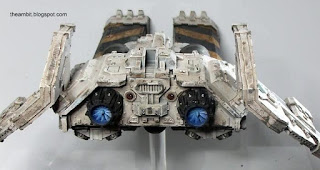 All in all this model was fairly quick to paint (probably 8 hours); the only thing I'm unhappy with is the silver on the wings.  The washes and highlights are a bit dull.  Anyway I'm one step closer to getting to that fellblade...