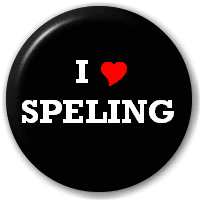 You can buy thisI've just come from Scrabble club, where I often have to suffer the indignity of people putting down completely silly misspellings of words and saying "Maybe the Americans spell it like that." (The Association of British Scrabble Players started playing to the international Scrabble dictionary, called SOWPODS in American Scrabble circles, in 2001. The American National Scrabble Association has taken an isolationist position, and now only North America doesn't play the combined dictionary.) I take great joy in telling the people who guess silly "American" words that the American spelling system is more regular than the British. Unfortunately, no one pays attention to me when I do so. So, I'll subject this audience to my rant, since I can't know for sure if you're ignoring me or not, and can pretend that you're all fascinated by my opinions on spelling-rule complexity.


British English follows the same rule, EXCEPT when it comes to words ending in L, which are doubled after short vowels regardless of the stress. So, for no particular reason labelling, travelling and gambolling have one more L in the preferred BrE spelling than in the preferred AmE spelling. Notably the 1990 Concise Oxford Dictionary (COD) doesn't even mention the possibility of labeled, labeling and labeler. The American Heritage Dictionary lists the double-L versions after the single-L ones.

For some reason, focus is also an exception. While the COD and Microsoft's UK English spellchecker prefer focuses over focusses, I have been "corrected" for using only one s.

Ones that really strike my American eye as wrong are BrE dialling and fuelling. Since the l is preceded by a 'long' vowel (the diphthongs /aj/ and /ju/) in my pronunciation), they shouldn't have doubled consonants, just as one doesn't double the L in tailing or healing. They seem to come under the 'doubling' rule because dial and fuel are perceived as having two syllables each, with the latter one being unstressed--i.e. di-al and fu-el. The COD presents the BrE pronunciation as /dai(ə)l/ and /'fju:əl/--so definitely two syllables in fuel but not necessarily in dial. I'm not convinced that the second syllable in fuel is regularly pronounced. Better Half pronounces fuel with one syllable and dial with close to two.

I'm not a big one for spelling reform, so I don't mind that the two spelling systems differ. Just don't insinuate that American spelling makes less sense than British!