Now, you could say that the following doesn't fit here because it's not about language, but I'd say it could be covered under the realm of pragmatics or interactional sociolinguistics...and anyway, it's just too interesting to pass up.

Via Boing Boing, quoting this source: 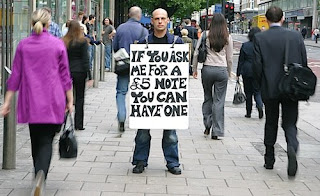 A price comparison website, www.moneysupermarket.com ran a experiment on the streets of London and Manchester:

[Representatives] wandered the streets this morning wearing sandwich boards offering a free £5 note to anyone who asked. Despite encountering over 1800 people, only 28 passers by bothered to take advantage of the offer.Americans, please imagine someone wearing this sign in your town, except it says $10 bill instead of £5 note. Don't you think that more than 1.5% of the passers-by would stop to claim some free money? (If any one of you is rich enough to carry out this experiment in/on the streets of New York or your nearest city, please do so and report back to us!)

From the source press release, we get the British reasoning for not asking for the money:
Why do Brits believe they would fail to take up the offer?
• Six in ten people say they their cynicism would prevent them from asking for free cash as they would suspect a catch or trick.
• Twenty per cent of people would simply not believe the offer was real – a trend which increased with age. Almost a third of over 60s claimed they wouldn’t believe the sandwich board wearer.
• Just over one in ten people said they would feel too embarrassed and three per cent of people said that £5 wasn’t worth the effort.
Now, I can sympathi{s/z}e with the cynicism and embarrassment, but I still can't believe so few people stopped, and can't believe that the cynicism and embarrassment would be so widely felt in the US. In fact, I think the natural optimism of the American character might lead some people to ask for the money even if they thought there was a catch, as they might feel confident in the belief that they wouldn't be caught by the catch.

Comparing a couple of anthropological works about the English and Americans offers some support for my suspicions. (I must admit, I'm making a point of citing sources because it's always dangerous to make generali{s/z}ations like this on a blog with an open commenting facility, so I need to do the "it's not just me who thinks this!" thing. I will check my e-mail tomorrow morning with some trepidation!)

Among the traits that Kate Fox (Watching the English) describes as being at the 'core' of Englishness are social dis-ease (making it difficult to approach a stranger), Eeyorishness (chronic pessimism--'it is in the nature of things to go wrong and be disappointing') and a sense of fair play (including a feeling that there is only so much to go around, so if you have more, someone else has less). I think that the reasons respondents gave for not taking the money could be brought together as "Even if it were a good idea for me to take money from you (and I can't imagine that it is), it's not worth £5 for me to veer out of my comfort zone to ask for it." (I just showed Better Half the photo of the man with the sandwich board and he said: "Don't take the money--he'll want to talk to you about Jesus!")

Stewart and Bennett (in their American Cultural Patterns) note that Americans are very action-orient(at)ed (approaching new situations with an eye to what needs to be done about them) and a belief that "the achievements of the individual are not gained at the expense of others"--which makes it easier to have an "I deserve it" attitude when faced with good fortune. And Americans (although I'm the exception that may prove the rule) are notoriously good at approaching strangers. (Better Half quips: "An American would go up, ask for the £5, then say, 'And let me tell you about Jesus!'")

So, who's got a few hundred dollars to spare and the wherewithal to make a sandwich board?