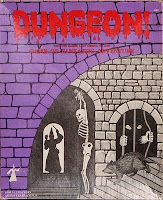 My posting will probably be light for a little while, since most of my RPG time is being devoted towards creating a nice printable version of TSR's (wonderfully clunky) 1975 board game "Dungeon!" (Yes, the exclamation point is part of the name.)

I lost track of my own 1979 printing of this game long ago, but it was the perfect "gateway drug" into D&D and other RPGs back in the day.  After explaining the game to my 9-year-old son, he got very excited to play it himself.  Thus, I've been tracking down rules, card lists, scans of the board, and so on, and starting to put together my own D.I.Y. version.  (Oh, who am I kidding?  I'm just as excited as my son is!)

The plan is to re-create the components in Powerpoint (with Googled images for the monsters and treasures), then print it in color at Kinkos. The 9-part board will be mounted on pieces of foamcore (kind of like geomorphs!), and the small cards will be cut out and laminated.

By the way, there's some cool hidden history of D&D tied up with this board game, since it was actually written in 1972, two years before the first publication of D&D.  Its creator, David Megarry, knew Gygax and Arneson and had access to their early Chainmail and Blackmoor rules. The whole story is probably yet to be written....  :-)