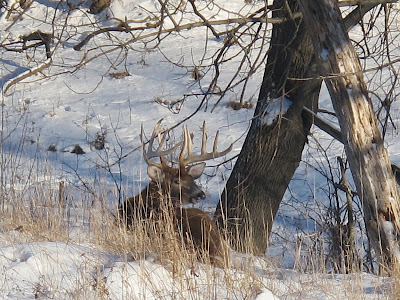 It's been cold here, -24 C (about -10 or 11, below zero Fahrenheit)  the other night, without the windchill. It was the coldest night it's been so far this winter. The deer have been moving around a little less, and Torn Ear has taken to sleeping outside our bedroom window. There is a creek there and usually they sleep up on the hill on the other side of it. But not Torn Ear - he's sleeping just at the edge of the yard, right outside the window. Chewing his cud.
I can only walk past the window and shake my head. It's just not something you see everyday. I think Izzie the cow could be lying next to him, chewing her cud, and he wouldn't even mind one bit.
It warmed up a bit the past couple of days, enough to let us work outside a little easier, without freezing in seconds. Our mule (ATV) wouldn't go into gear a couple of days ago and we were not looking forward to it needing major repair - everything pointed towards a transmission problem. Which would have been pretty horrible. It would have meant lots of money to fix it, and days, maybe a week or more without the machine...Thankfully yesterday morning it didn't take us too long to fix it - there was a loose adjusting nut on the shifter cable, at the transmission end... so after Kevin tightened it up, everything was working fine. We could not believe our luck!
This afternoon after we split a face cord of wood to fill up our wood box at home, we took the mule out in the bush for a run and everything is good so far, so it seems like we lucked out and that was the only problem and nothing worse. We really dodged a bullet there - mostly aimed straight at our wallet. In other news this week, we had a divorce, a funeral, and a delivery.
The divorce was between Snickerdoodle, our senior Tom turkey, and Maggie, our senior lady. I'm not sure what took place between the two of them but they are no longer on speaking terms and Maggie has kicked Snick out of their house. They share their own private bungalow, while the other turkeys live together. They have been a couple for well over a year now. Snick is Maggies third husband... the other two have previously kicked the bucket... so her track record with men is questionable anyway. The other turkeys won't accept Snick into their house, so he's taken up residence with the ducks and Max & Flav in their run in shed for now. Maybe if he's good to Maggie she'll take him back, but it looks like she might be setting her one good eye (she only has one) on a new mate.
For the funeral, our nearest neighbour passed away... he hasn't lived out here for several years because of his health, and he was 81 years old. He went peacefully from what we were told. There were seven boys in this particular family and none of them ever married. They all lived at the old farm until the end of their days and even into 2004 when this last brother lived in the house they had no indoor bathroom, and they had only one light bulb hanging in the house. The wood cook stove heated the entire house. All the local people around here tell some pretty crazy stories about the boys. They were the last of a dying breed - crazy, yes, but a lot of us living way out here have to be a little crazy, (or in our case, depending on who you speak to, a lot) but kind hearted and neighbourly, things that get harder to find in today's world.
For the package, we came home late in the cold and snow and almost forgot to check our mailbox, but Kevin remembered last minute. I'm glad we did because there was a box in there (which was surprising enough, usually we have to go pick packages up in the village) and it was from Germany! Our good friend Helmut, sent us a disc with pictures of his last trip to the U.S. and along with it, gummy bears and cookies! It made our day. We broke into the cookies pretty quickly... why wait, they've traveled this far! It was a big surprise. Thank you Helmut! We also got a great card from Monika and Thomas. You can read about when they visited the farm, here.
I told Kevin, before we started stuffing ourselves with cookies, we should take a picture first. He decided it would be a good idea to put the goodies by the fire to get a picture of them. This process took about 15 minutes longer than I had wanted it to because of pictures like this: 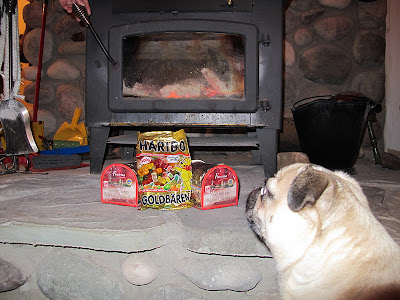 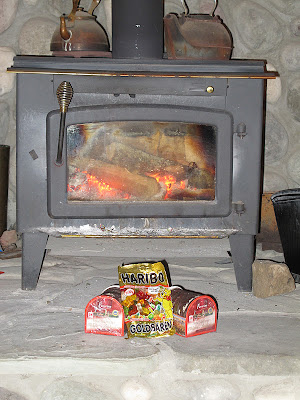 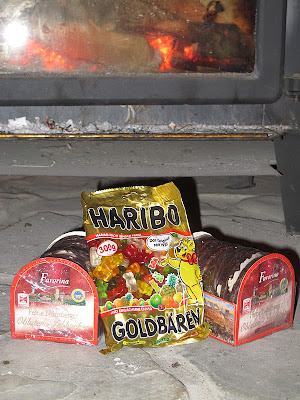 So there is the cookies and now they are all gone... Alright, we didn't eat them all... yet.

Around the house, everyone has been their usual lazy selves. Nothing new to report - just a bunch of lazy bums... 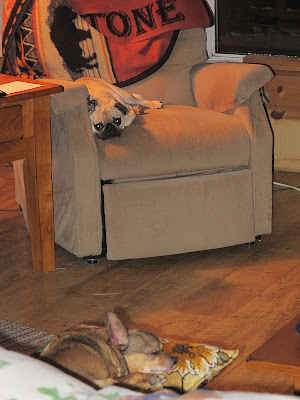 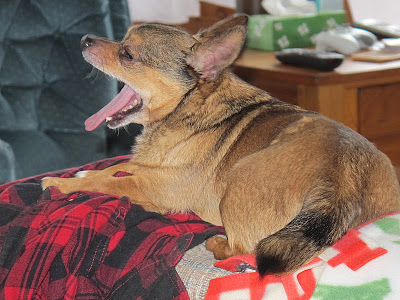 These guys were in bed and didn't even bother getting up... 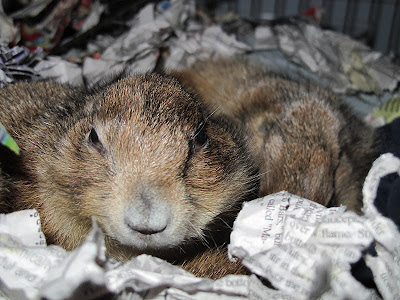 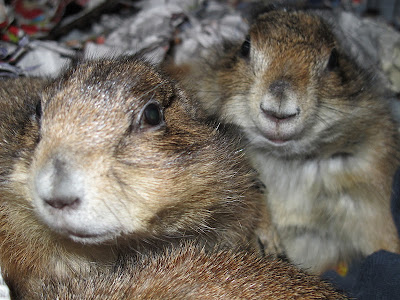 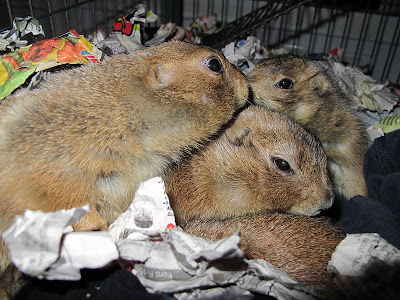 We got a dusting of fresh snow last night, which was great for looking at tracks in the forest today. Lots of deer tracks, we saw rabbit tracks in the bush, fisher tracks, and lots of fox and coyote. What was funny was that on one of the trails of fox tracks along one of our trails, he stopped to pee on a rock to mark his territory. You could still see the pee stain on the rock. 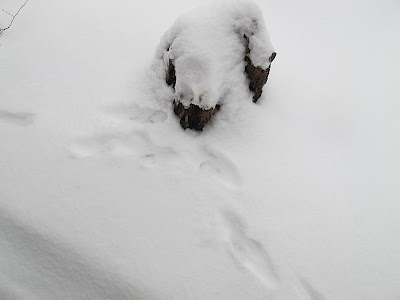 It was pretty down at the creek - and it's still open. Some of the small ponds are frozen, but even our big pond at the house is not safe enough to walk on - the deer haven't been out on it yet once. 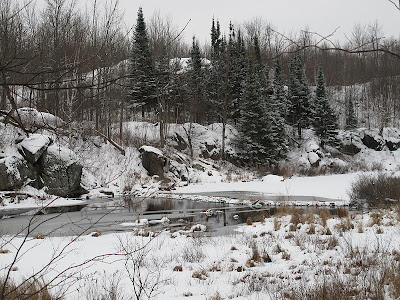 My first two trail cameras were empty - the ones that had the most activity on them a few days ago. My third one was full of pictures. When we left this camera (which is the furthest away from the house right now) I left behind some leftover scraps from the kitchen I had, onion peelings, I think there were a handful of stale pretzels, etc, that I had in the back of the mule. Apparently everyone thought this was pretty interesting stuff because not only did the crows show up but also an Immature Bald Eagle! 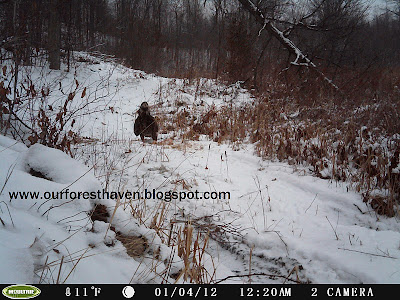 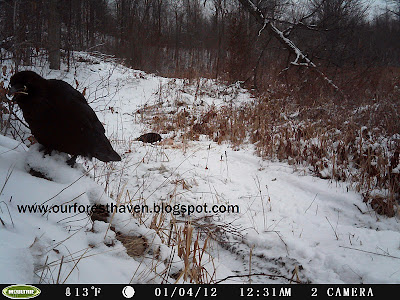 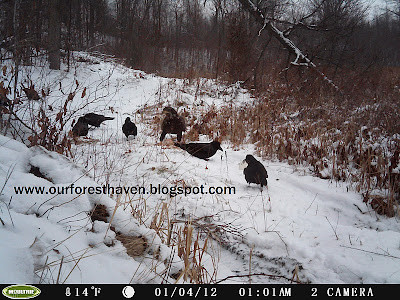 The coyote came back... 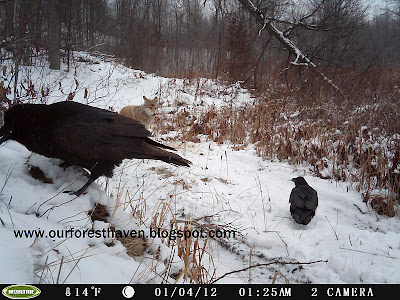 And later, these three guys showed up, passing through. 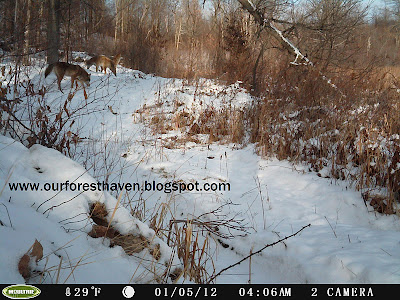 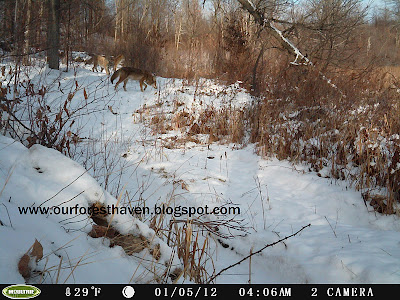 On the way home, we saw these three deer crossing a small pond behind the house by our wood yard... Who is that in the middle? That's Buttons, our orphan with his new friends. 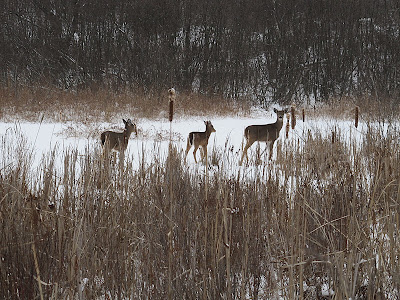 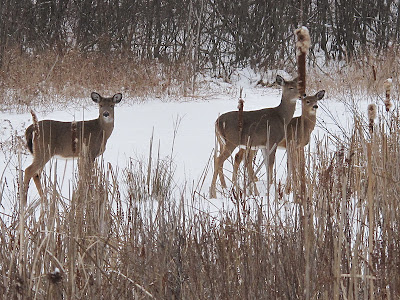 We've had two strange bucks show up in the past week - only a couple of times each. One of them had already lost both his antlers... We have no idea who he is, since he has no markings that stand out. By his body condition he looks like a fairly big buck and an older one.., But it's difficult to tell. 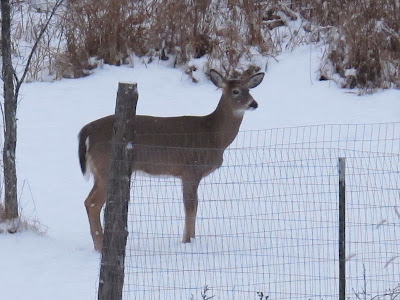 The other one, lost one antler but has been holding the other one, which is common, that they loose one and hold the other for a few days, or even a week. Our regular bucks have not started to loose their antlers yet - the ones we've seen. Deer Norman hasn't been around for a few days now. If he returns without them, he's easy to identify for us, so we'll know it's him. The one antlered buck watched me out in the yard with the little dogs a couple of nights ago, he stood across the creek and just watched us while the dogs had their evening pee. Maybe he was trying to figure out what they were. 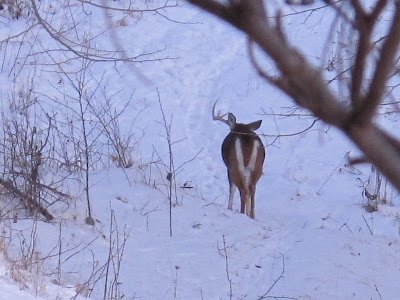 This is the best picture we could get of him, wandering off back into the bush.

Now it's almost 6 PM and it's time to feed the dogs, get everyone their evening snacks and head into the kitchen to try and figure out what to make for supper. I'm starving and thanks to Helmut all I can see is cookies... I've been meaning to try a recipe for roasted winter vegetable bread soup, if I can muster up the energy to get it started.

When I headed out almost at dark to put the barn animals to bed, my Pyrenees were barking... at the coyotes who were howling away by the maples, letting us know they know we were in their area earlier today, and they are keeping an eye on us... just as we are keeping an eye (all of em) on them.