I've been following the excellent site Propnomicon for some years now and it never fails to deliver quality reportage on the Lovecraftian craft/maker community. The blog tends to eschew things like the Cthulhu-plushy phenomena and concentrate on serious props, LARP items and RPG hand-outs. One of its regular posts, dubbed Cthulhu Fhtagn!, profiles sculpts based on Lovecraft's description of the Cthulhu idol in his classic tale The Call of Cthulhu...
[The statue was] between seven and eight inches in height, and of exquisitely artistic workmanship. It represented a monster of vaguely anthropoid outline, but with an octopus-like head whose face was a mass of feelers, a scaly, rubbery-looking body, prodigious claws on hind and fore feet, and long, narrow wings behind. This thing, which seemed instinct with a fearsome and unnatural malignancy, was of a somewhat bloated corpulence, and squatted evilly on a rectangular block or pedestal covered with undecipherable characters. The tips of the wings touched the back edge of the block, the seat occupied the centre, whilst the long, curved claws of the doubled-up, crouching hind legs gripped the front edge and extended a quarter of the way clown toward the bottom of the pedestal. The cephalopod head was bent forward, so that the ends of the facial feelers brushed the backs of huge fore paws which clasped the croucher's elevated knees. The aspect of the whole was abnormally life-like, and the more subtly fearful because its source was so totally unknown. Its vast, awesome, and incalculable age was unmistakable; yet not one link did it shew with any known type of art belonging to civilisation's youth - or indeed to any other time. Totally separate and apart, its very material was a mystery; for the soapy, greenish-black stone with its golden or iridescent flecks and striations resembled nothing familiar to geology or mineralogy. Propnomicon has profiled some astounding interpretations over the years and it's been interesting to see the different artistic styles used - some are primitive, some quite Modernist while others are just a bit bonkers. Here are some of my favourites: 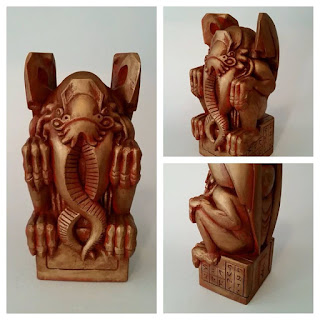 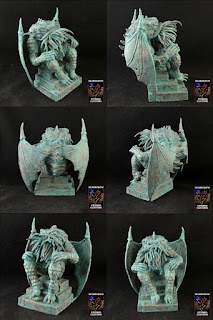 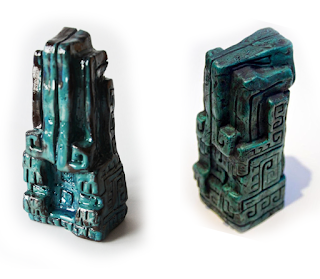 An interesting interpretation by Temir7 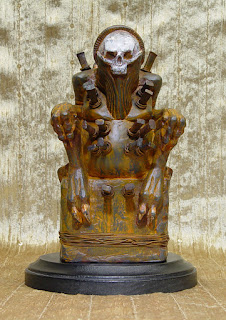 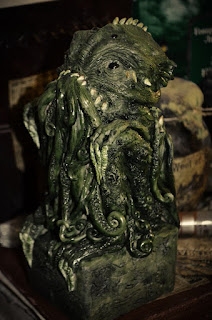 This rather grumpy little fellow is by Alice Tochilovski 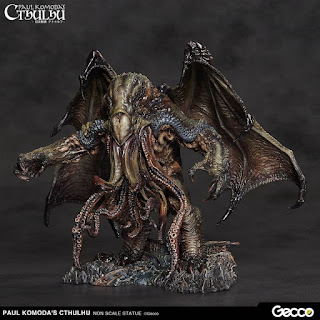 Finally, although it's not strictly a statue, I really love this sculpt of the big guy himself by Paul Komoda. He's really nailed the pulsating, invertebrate-out-of-water feel to all those tentacles and ink sacks.