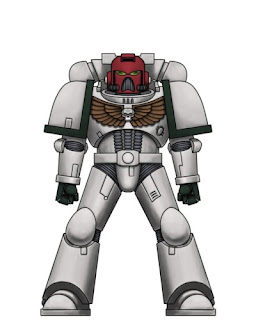 Veteran Sergeant Marius Hex of the Emerald FistsFor anyone who's read my blog a few months back I was planning to make a Crimson Fist company.  This idea never took off.  I actually spent a lot of time trading for and collecting parts to make the army but never really put anything together save a few marines. With sixth coming out and my turn for nurgle I've decided there's a far better way to utilise all of those models.  I'm going to steal some inspiration from both the Crimson Fists and the Deathguard and make Loyalist Squads that will follow (the best I can) crimson fist AND codex astartes markings.  The colour scheme for these guys will also match that of the deathguard I'll paint up.  That way when they're used in my SM armies, they'll look nothing out of sort.  When used as CSM they'll blend right in with the plague marines, terminators and war machines.  Now the worst part is that they'll be white/cream coloured but I'm hoping my airbrush will make that problem non existent.  Not only that, making them a DIY chapter, I can write some bad fluff.


I present to you,
The Emerald Fists
The origins of the Emerald Fists are unknown; however records of their deeds can be traced back as far as M35 near the Eye of Terror.  The Fists have functioned as a fleet based chapter as far back as records are available.  They specialise in siege warfare and prefer frontal assaults to more subtle methods of war holding strength, fortitude and resolve as the three pillars of their training.As early as 152.M41 stories of strange sightings began to trickle in to the Inquisition involving the Emerald Fists.  Picter-feed images relayed out of system show Emerald Fist forces landing planet side amidst fierce fighting with chaos forces.  Images however show the Fists seemingly fighting alongside the traitor forces against the Imperium.  The fleet has since moved away from their last reported coordinates and has been persecuting a crusade for the last 900 years and have not responded to Imperial Summons.
The Inquisition has not yet branded the chapter traitor as the wheels of Terra are ever slow to move especially with conflicting stories.  Many in the Inquisition have their own thoughts on the matter.  The following communique was transmitted shortly after the Fernixa incident:
***decrypt***Inquisitor Hornel, I have been attempting to investigate the Emerald Fist chapter for the last decade.  My findings are inconclusive however I believe that the Fist's gene-seed was corrupted sometime in M40 with a carrier strain of the Destroyer Plague.  I believe this strain idle and corrupted the chapter from within and was masked from all who seek to expunge the taint of chaos from the Astartes.  Slowly as the chapter replenished battlefield loses more and more marines were inducted and transformed with infected progenoid gland.  Whether this initial infection occurred during fleet based action near the eye, or from indiscriminate recruitment following the battle of Invus where the chapter suffered near catastrophic loses I can't be certain.  It appears that the chapter is completely infected and the virus has begun to mutate to its original form.  With the souls of its victims now corrupt it has moved on to the flesh.  I have seen horrible things, the Emerald Fists fight alongside warp spawn and wade through pestilent environs with impunity.  ***end transmission***
The following was recorded on the Truvort IV planetary governor's palace wall in 817.M41:
During the darkest days of the coldest Winter when our world was besieged by xenos spawned from the deepest depths of the void the Emerald Fists descended.  Like a god-wielded hammer they smashed the xenos threat into oblivion.  They asked for nothing and left without a trace.  We are forever indebted.
Conflicting accounts surround the Emerald Fists.  Is there any truth to the tales of their dealings with the warp?  Was the Truvort IV battle merely a subtle way to create a testing ground for the next plague?  Has Nurgle grown tiresome of outright corruption and now seeks to dabble with the slow rot of society?  Time will only tell.

I'd appreciate any thoughts on this from anyone willing.  Thanks!