At 9A.M, with the thermometer indicating 32.C. and we are packed and ready to leave Coral Bay on our way to Carnarvon, 237km away.
Because on the way to Coral Bay we hadn't stopped, we stopped now to photograph the huge termite mounds, some with funny faces drawn on them.

After 9km we turn right and join the Exmount/Minilya Road, stopping again about 30km later to photograph the Tropic of Capricorn sign. 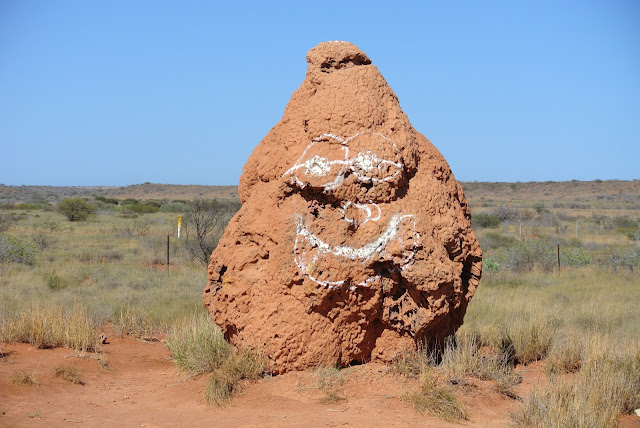 One of hundreds of termite mounds 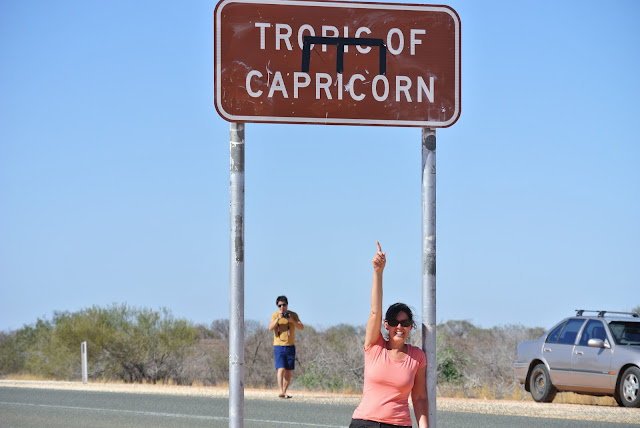 Tropic of Capricorn sign on the Minilya/Exmouth RoadAnother 40kms later we stop for coffee at the Minilya Roadhouse. Here we join the North West Coastal Highway again. Two and a half hours after we started, we arrive in the town of Carnarvon, fill up at a petrol station at 1,675$/litre and make a pit stop at the supermarket to buy some fruit for the trip. 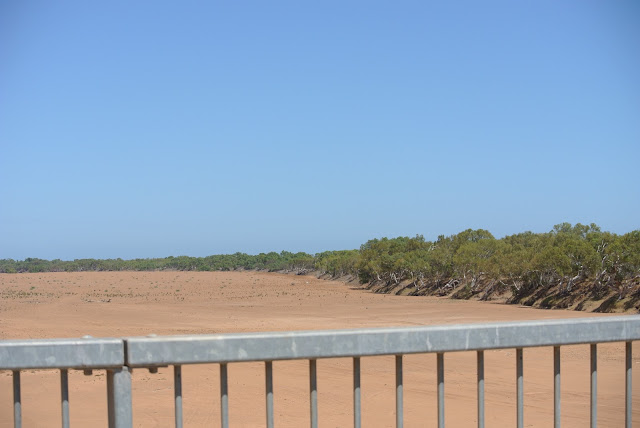 The dry Gascoyne River near CarnarvonWe drove over the Gascoyne River bridge, the river bed completely dry. This is the longest river in Western Australia with 865km, and flows into the Indian Ocean at Carnarvon.
The river only flows for about 120 days of the year and below the dry river bed for the rest of the year. In December 2010, (considered the driest month of the year) the worst floods on records were triggered by heavy rainfalls,  of 247mm over 24 hours (average being 5mm a month, and 228mm a year).
Although there were no deaths, entire homes were washed away in Carnarvon and 170km inland in Gascoyne Junction. Carnarvon was isolated due to the flood waters, with the North West Coastal highway shut down for several days. Vast agricultural areas with crops were wiped out and about 2000 cattle died. Some areas recorded water levels above 15 metres!

At 1pm. and 120km later, we stopped for lunch at the Wooramel Roadhouse. We had our fish sandwiches (with shredded fish from fish barbecue the previous night) and fruit. It was impossible to eat outside the car as the flies were out in force! It was also quite hot at 36.C, so we managed to get most of the flies out of the car, closed the windows, put the air-con on and sat inside the car eating.
Afterwards we went inside to buy an ice-cream and use the bathroom. Back on the highway, we had 356kms to our overnight stop in Geraldton. A Road train at the roadhouseAnother pit stop at the Billabong Roadhouse to stretch our legs, and a cup of coffee.It was now 42.C outside at 2,30h.We found this sign outside the roadhouse was quite hilarious, just typical Australian humour. 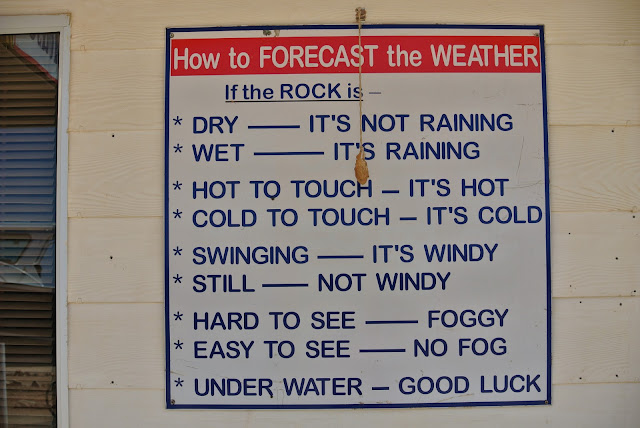 sign outside Billabong roadhouseOn the highway past the Kalbarri Road turnoff we had to go to the side of the road to make way for this monster truck bound for the mines up north. It's arrival was signaled by a police car with a sign, then another car that drove next to the truck (on our lane) and after the truck another car with another sign. I pity those driving behind the truck! 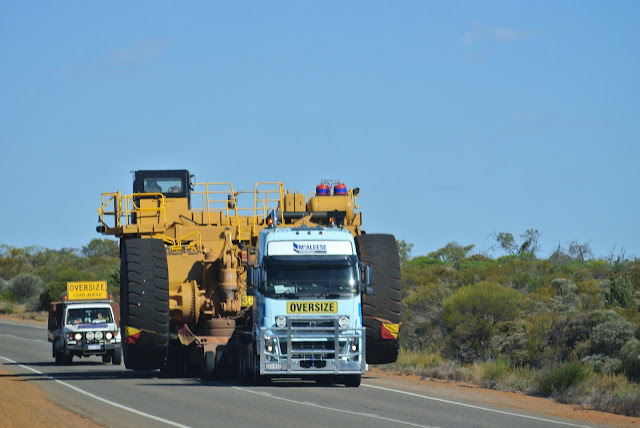 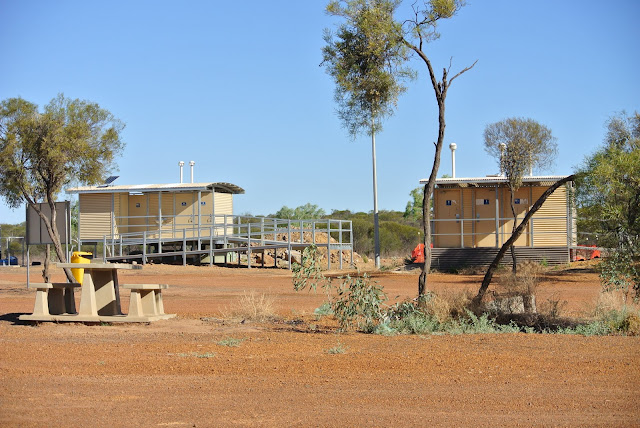 One of the fancier toilet and eating stops on the highwayAt 6,00pm we arrived in Geraldton, drove through town to the southern end and arrived at our accommodation for the night - Belair Gardens Caravan Park.
Our 2 bedroom cabin was wonderful, clean, modern and very comfortable. The bed was probably the most comfortable we had on this trip, the bathroom the most modern too, with an enclosed shower cabin and hand held shower! Bliss!!
At 160$ a night for the cabin it was quite affordable too. 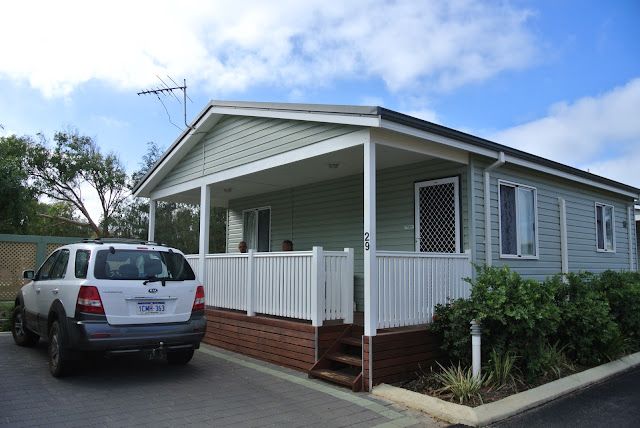 Our little cabin with a veranda too 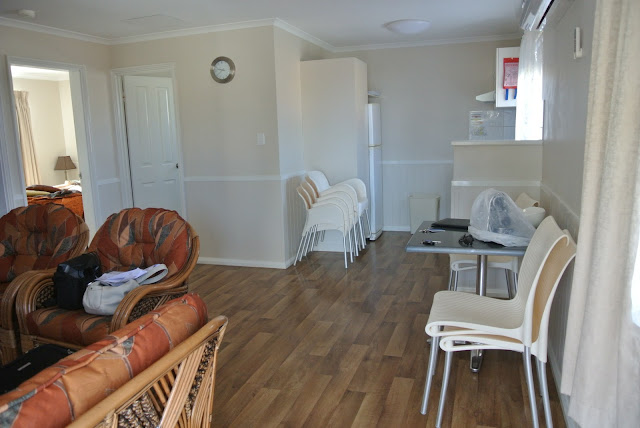 The lounge/dining room and kitchen 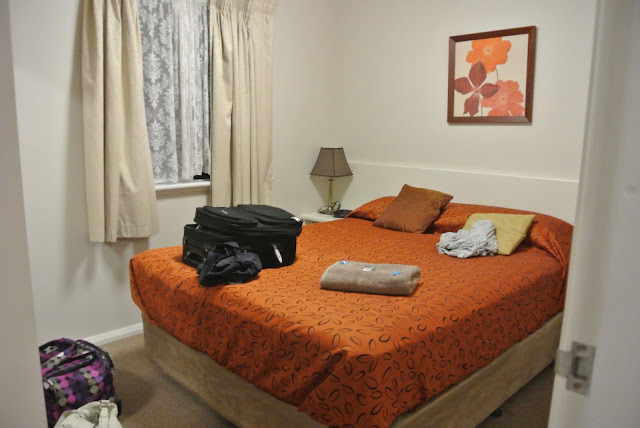 The main bedroom with a double bed and wardrobeAfter going to the supermarket for some provisions we made dinner which we ate outside in the little veranda and after a refreshing shower we went to sleep.

Next day: the trip continues with more beautiful scenery and we arrive home.