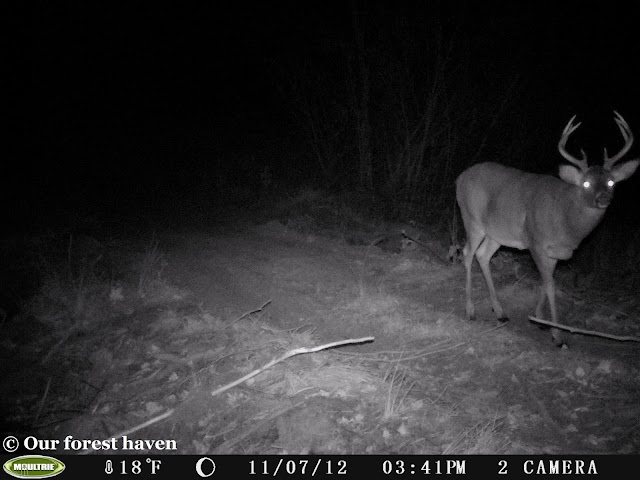 *Please note our trail camera clock was off - so for example, the above time says 3:41 PM but it was actually AM, and also an hour earlier (thanks to the time change) so it was actually 2:41 AM when he went through. It's fixed now, but all of the below pictures will have a bad time on them. Everything else is correct.

We rushed around the city like crazy people after my dental appointment and our truck appointment the other day, because we couldn't be home later than 4:30... since it's dark by 5 now and our critters are always tucked safely into their barn before dark. We made it back to the bush just in time (with plenty of time before dark) to see a buck standing in the yard... The same buck we just caught on our trail camera in the photo above... This buck with the dark face was standing in the yard starring at us. 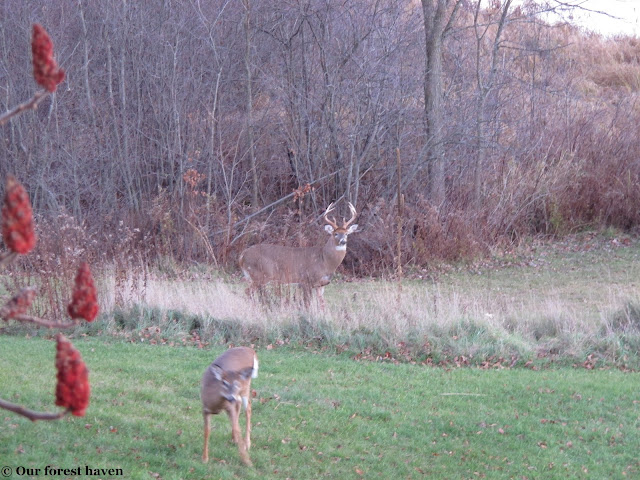 On the time I got inside and got my camera and ran out on the porch, he had come into the yard. I started snapping pictures of him, amazed that he wasn't bothered by us because as far as I knew, this was a strange deer.
I saw right away he was here for one reason and one reason only - the does. He started sniffing pee in the yard and then doing the typical buck things most male animals do - goats, sheep, deer... flaring his lips and making strange faces. 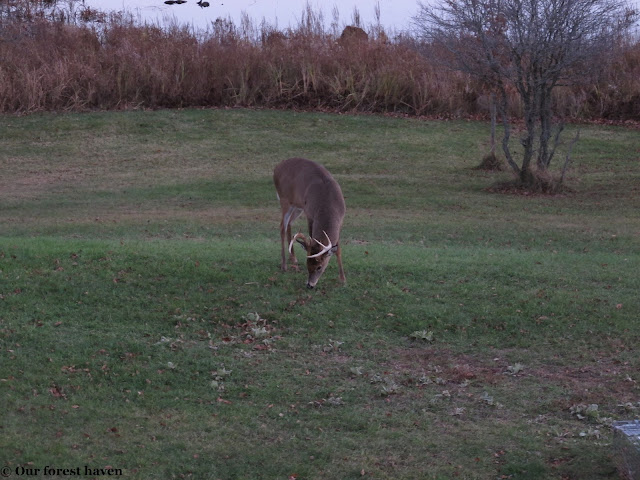 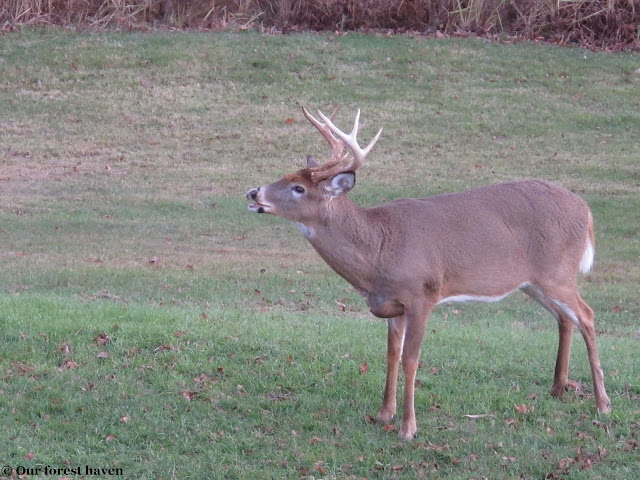 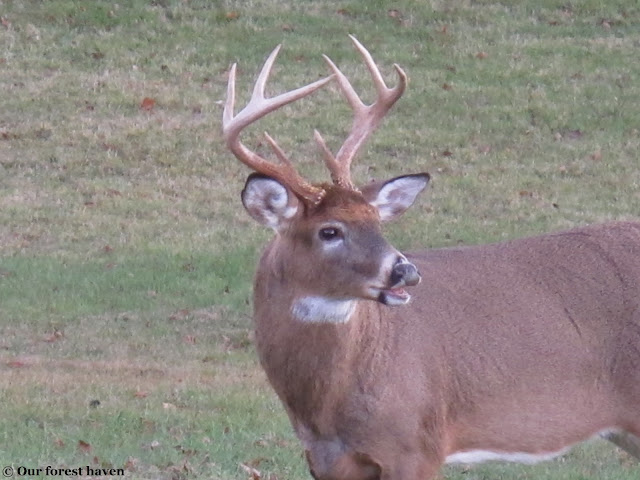 Then he started chasing the does all over the place until one ran away from the others and he kept after her right out of the yard and through the field next to the house.
It wasn't until I came back inside and was looking at my pictures that I saw his chest...
See the big bump in his chest? It's not common for them to have such a bump - not that big. He has a very distinctive face, as you can see, with what we call a triangle nose. One of the first bucks here, before I lived here, and before Torn Ear, was called Triangle nose because he had this feature. We haven't seen it in too many of our deer since, but a couple. This deer also has a dark face, which stands out, so he's very easy to recognize. Any deer we catch on trail cameras, or who come to the house or we happen to get a picture of in the bush, we identify through various features. We use their antlers but only as an aid, since they drop them, and since they change year to year, you can't expect to recognize a deer from his antlers alone. But a big white neck band, scars, nose and eye marks... these are things that don't change.
Right away we had a feeling we had seen this deer before - because of his chest. A couple of winters ago, we had a fawn who disappeared. He was here for a while, in early winter, and then he vanished during the winter, which made us assume he didn't make it. He had a big lump on his chest, so we called him Lumpy. I know, not very creative, but it fit. We assumed he was sick because of the lump and that it was a tumor of some sort. I found one picture of him, but from the side, so I need to keep looking through my files. I have about 50,000 pictures, so I'm working on it. If I could find a picture with his face on it, I'd be able to tell. But I'm not sure if the age is right for this deer. This is a young buck, but not that young.

Regardless, either he's been here before and knows the house and us, or he's so full of hormones he really just didn't care. Could be either one.

As for the other trail camera pics of interest, (meaning not ones of crows, leaves, trees blowing in the wind...) 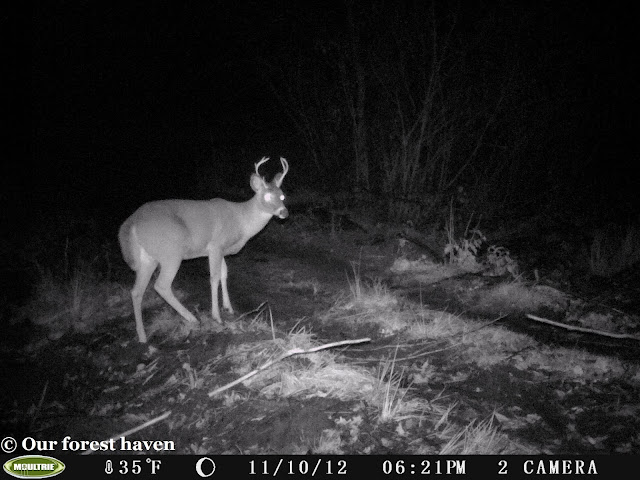 This little guy, no idea who he is... aside from cute. 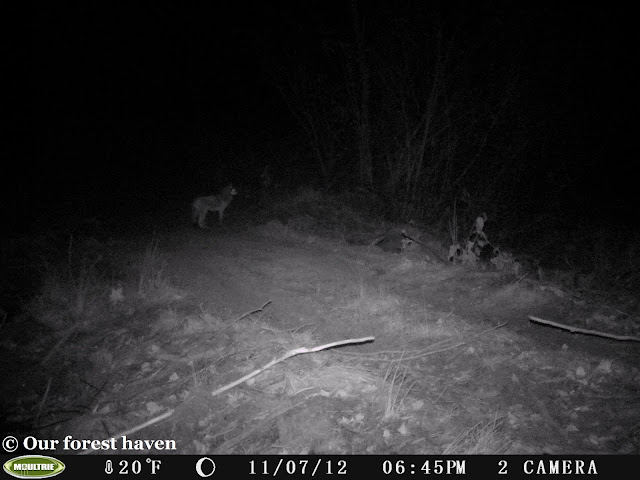 Mr. Coyote heading straight towards the house... apparently looking for trouble, I have no doubt. 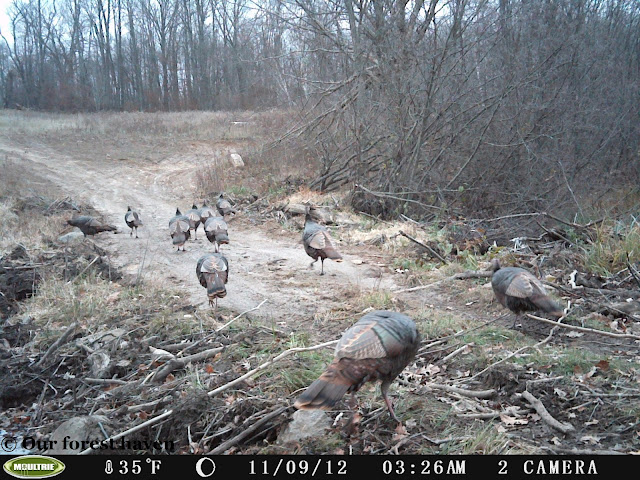 A nice flock of hen turkeys coming through... 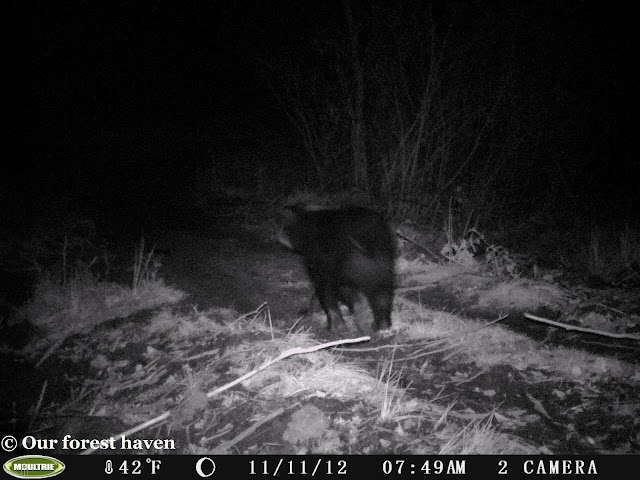 And then there is the bear... This picture really confused us for a while. See the bum? See what looks like a long tail, like a pigs tail? Freaked us right out at first. But then we realized, his bum must have blurred, for some reason. It's odd and we haven't had it happen before, but there is always a first for everything. And a blur is a lot easier to explain than a black bear with a pigs tail. That's a bit of a stretch.