Better Half came home tonight to find me watching The Big Bang Theory with a sleeping baby on my lap. (My excuse: I was stuck--I couldn't very well disturb the baby, who hates to nap and so must be tricked into doing it on my lap. So, nothing to do but power up the remote control.) In this episode, the boys are preparing for the "Physics Bowl". When they started practi{c/s}ing for the Bowl with physics quiz questions, BH said, "Oh, that's what they're doing! I couldn't figure out why physicists would get so excited about bowling!"

The AmE bowl in Physics Bowl is the same as the more general College Bowl--a contest between (usually) students in which they answer (usually) academic questions. The UK equivalent to the College Bowl is University Challenge, a television program(me) in which students from different universities (or colleges within the Oxbridge/London universities) compete on television. (Perhaps some Americans will have seen this in the book/film Starter for Ten--if it was released over there...) University Challenge was based on the College Bowl, but it has overtaken its ancestor in terms of popularity. The College Bowl was televised in the US from the 1950s until 1970, but University Challenge is a television institution that's still very popular today. My own bowl experience was to be in the History Bowl when I was in the 8th grade. In that case, it was a county-wide competition for which I had to learn much more than I ever wanted to know about the Erie Canal. (I stayed home on the day of the final, insisting that I was [AmE-preferred] sick/[BrE-preferred] ill, but I think my mother was right in insisting that it was just butterflies. Oh, the regret.)

I'm fairly certain that the name of these kinds of contests (which hasn't made it into the OED or American Heritage) is derived from the use of bowl to refer to certain post-season football (=BrE American football) games, such as the Rose Bowl, which are played between (AmE) college (= BrE university) teams. (Plus the Super Bowl, which is played between professional teams.) They are so-called because of the bowl shape of the stadiums (or stadia, if you prefer--the spellchecker doesn't) in which they were first played. 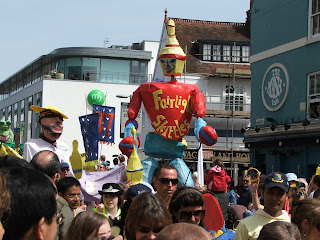 The kind of bowl(ing) that Better Half was imagining is generally called bowling in AmE, but ten-pin bowling in BrE. (In AmE bowling can also refer to variants like candlepin bowling. You can look these things up if you'd like to know the difference! The social class implications of bowling in America are noted in the comments of a recent post.) This distinguishes it from the game more traditionally played in England, (lawn) bowls, which is closely related to the continental games boules/pétanque and bocce (which is the more familiar game in America, thanks to Italian immigrants). Another kind of bowling found in the UK (more than the US), particularly in the Southwest, is skittles, the game from which modern indoor bowling is derived. This provides me with an excuse to post one of my photos of the Children's Parade in the Brighton Festival. This year the theme was favo(u)rite games, and one school chose skittles. (It's not the best photo I took, but I've suddenly had qualms about posting a photo of other people's children.) In the US, I imagine most people would associate skittles with a (AmE) candy/(BrE) sweet.

(...which compels an anecdote. I was at a party in Waco, Texas once and met a man who told me he was in Research and Development at M&M/Mars, one of the bigger employers in town. I asked what he'd developed. His wife proudly put her arm in his and beamed, "He invented Skittles!" As you can see, one meets Very Important People in Waco. And I should join Anecdoters Anonymous.)

The verb to bowl is used to describe what one does with the projectile in all of these games, but is also used to describe how the ball is delivered (or not) to the bat in cricket--and hence the person who does that delivering is the bowler. The closest thing in popular American sports is the pitcher, who pitches a baseball.

Going further afield, another bowl that differs is found in the (AmE) bathroom/(BrE informal) loo. While AmE speakers clean the toilet bowl, BrE speakers stick their brushes into the toilet's pan. I'm not absolutely sure that BrE speakers don't also use bowl in this sense (do you?), but it jars whenever I hear people speak about the toilet pan, as it makes me imagine something very shallow.

Those are the bowl differences I've noticed myself, although the OED also gives a special Scottish English sense: a marble. Their only example is from 1826, so you Scots will have to tell us whether it's current!