Even though I think “The Next Generation” (1987-1994) is by far the best of the five “Star Trek” series, I have, over the years, remained a fervent devotee of Captain James T. Kirk. As played by William Shatner, Kirk was a macho he-man who made all the ladies swoon, despite Shatner’s ham-bone overacting. Kirk also happened to be a male chauvinist pig — typical of the period — but I liked him anyway because he was decisive and never wrong.

Shatner has, of course, reinvented himself many times since then. Besides continuing to act on television and in the movies, he’s become an author (fiction as well as nonfiction) and released a well-reviewed music CD, called “Has Been,” a couple of years ago. He’s also the very funny spokesperson for Priceline.com. But perhaps his best role of all is as Denny Crane, the “mad cow” (i.e., Alzheimer’s) impaired senior partner on the TV show “Boston Legal.” When he’s not sleeping in court, he’s flirting with female clients (Kirk again!) or smoking cigars on his balcony with best friend and coworker Alan Shore (James Spader). I love Denny Crane.

I’ve seen Shatner many times at “Star Trek” conventions and even sat two feet away from him in a makeshift “green room” before he went on the air during a Mark & Brian radio show several years ago. Still, I was very excited when Tim called me on Tuesday to say that “Bill” was coming into the station later that morning.

Tim: I forgot to tell you that William Shatner is coming into the station today to promote some project he’s involved in.

Me (surprised): What?! If I would have known he was going to be there, I would have given you something to have him sign!

The phone rang again 45 minutes later. Tim had found an excuse to come home and so I ran around trying to find something for Shatner to sign. I finally settled on the cover of the season #1 DVD of “Boston Legal.” I shoved Tim out the door and turned on the radio. Shatner was reliving some moment from “Star Trek,” for the millionth time, but made it clear that he wanted to talk about other things, including his new pet project: sending department store gift cards to soldiers recuperating at Walter Reed hospital. He chatted on the air for about 50 minutes and then left to film “Boston Legal.” What a great way to start the day!

I waited for Tim to call, but he never did, so I assumed he hadn’t met my hero. I then ran off to UCLA, where I was teaching at noon.

When I returned home at 4PM, I found this photo in my e-mailbox, along with the following message: 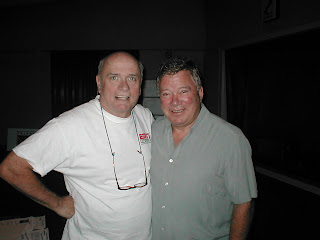 “Denny Crane!!! I got the autograph. Love, Tim”

Denny and William Shatner’s signature now watch me all day long from where they hang on my office wall. Beam me up, indeed!