You know what they say about best laid plans.  In late January, I announced my intention to enter William Dowie's contest to craft an old-school role playing game adventure with an ancient Roman theme.  I got a cool idea, and began running with it, but the contest deadline (the Kalends of Febrvarius) was just too soon.  The contest finished up with my minim opus only about halfway done.  The winners of the contest were announced a few weeks ago, and I'm curious to see what they came up with.

However, never one to let good sense be my guide, I kept working on the darn thing, and finally finished it.  Thus, I give you XVI Troop, a free 16-page adventure setting guide for old-school D&D (or compatible rules).  I've uploaded the PDF file to Google Docs, or whatever they're calling it now, at this URL.  I've also modified the top bar of this blog to collect together all of the "Free RPG adventures" that I've produced and am distributing, well, for freeee.

Fans of a certain moldy old TV show will no doubt groan at my punnish title.  But the idea of an out-of-the-way army fort -- with lax military discipline and too much fraternization with the natives -- was too irresistible not to adapt to the wilds of northern Britain (just beneath Hadrian's Wall) circa 140 AD.  What I've put together has a bit of a mini-gazetteer for this fort and its environs, a bit of detail on how to adjust D&D character generation to give your fictional alter egos some ancient Roman flavor, and a bit of help for the Dungeon Master in coming up with interesting scenarios, events, and non-player characters.

As a teaser, here's a table of Roman character quirks that will surely get the "Life of Brian" jokes running fast and loose... 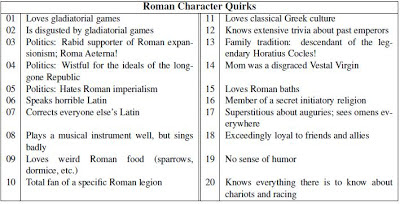